The NFL’s new “anthem policy” requires players to “respect” the flag and the national anthem or stay in the locker room until it is played. The NFL refers to this as a compromise — it was anything but.

This was a mandate, not a decision arrived at through a collaborative process. Despite claiming that they would consult with the players before making a decision on this issue, the National Football League Players Association said, “The NFL chose to not consult the union in the development of this new ‘policy.’” So the league and owners will decide what shows “respect.”

Kneeling is out. The Pittsburgh Steelers indicated that raising a fist or linking arms is out. If one team decides a gesture or posture is respectful but another team doesn’t like it, what will happen? One of the NFL officials actually said, “We will know it when we see it.”

Telling players to stay in the locker room also rings familiar as well — get to the back of the bus. Get to the other water fountain. Do not appear in public in ways that will threaten or displease white people in America. If you want to protest, do it in a way that white folks don’t have to see it or deal with your claimed injustices.

And with the collusion to keep Colin Kaepernick out of the league combined with teams asking free agents if they will stand during the anthem, another message is being delivered. Be thankful you are making all that money — you play a game for a living. If we didn’t allow you to be making this money, you would be out there with the rest of “them.”

President Donald Trump weighed in on players staying in the locker room saying, “Maybe you should not be in the country.” In a country that claims to value free speech and expression, you should be fined or forced to leave the country if you “speak” in a way some don’t like. Orwell would have loved it.

John Elway and other NFL officials have said that we should “take the politics out of football.” Really? What about the millions of dollars paid to the NFL by the Department of Defense to promote the military? If encouraging people not to serve in the military is a political act, then encouraging them to serve is equally political. What about the show of military aircraft flying overhead and flags streaming across the field? Kneeling during the anthem has nothing to do with being for or against military recruiting, but the Pentagon paid for the NFL to promote the military — an overtly political act — and the NFL has been delivering. There is nothing wrong with that, but it is what it is. The NFL gave up being non-political a long time ago.

Only one team has said they will stop selling concessions during the anthem. It does not appear that the suspending the selling of beer, hotdogs, banners, and the like was even considered by the group. I guess it is not disrespectful to leave your seat and miss the anthem in order to get a dog and a beer. After all, there is money to be made. And no disrespect is shown by the fans at home who go to the bathroom, grab another beer, or set up the snacks during the anthem. The respect that must be shown must come from the players.

Houston Texans owner Bob McNair told players last year, “You fellas need to ask your compadres, fellas, stop that other business, let’s go out and do something that really produces positive results, and we’ll help you.” Much has been made of the NFL setting aside money for social justice. The money was not new money to support communities, but re-allocating already designated charitable funds from one issue (breast cancer) to another (social justice). This is what caring means to an institution which was forecast to hit $14 billion in gross revenue last year.

If people are serious about making a difference, they use whatever platform they have to make that clear. The NFL released its new policy at the same time news was breaking about NBA player Sterling Brown being abused and tased by officers of the Milwaukee Police Department. This is the kind of incident that started the protests. The NFL did not mention this incident in any of its messaging. Apparently speaking out about police abuse in the Black community isn’t something they are interested in during the offseason either.

By Jeffery Robinson, ACLU Deputy Legal Director and Director of the Trone Center for Justice and Equality 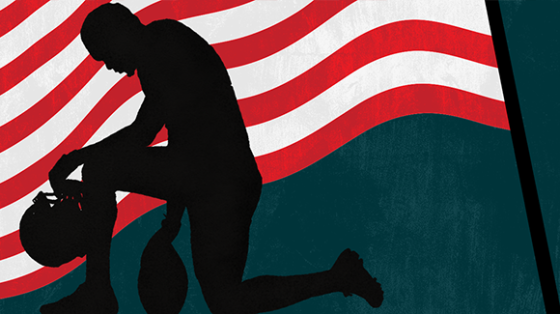 It’s Time to Reaffirm Our First Amendment Right to Boycott

Pernell v. Florida Board of Governors

Rights Behind the Headlines: Gov. DeSantis’ misguided view of the...