It’s Not Just Roe: How the Future Supreme Court Could Gut Abortion Rights

Now that President Donald Trump has nominated Brett Kavanaugh to replace Justice Anthony Kennedy on the Supreme Court, it will be up to the Senate to fully vet him so that the American people can determine whether he will uphold the basic civil rights and liberties relied on by everyone in this country. This is particularly true when it comes to abortion rights, where Kavanaugh’s prior opinions on the subject, coupled with the fact that Donald Trump vowed to only nominate justices who would overturn Roe v. Wade, give rise to serious concern about women’s continued ability to access abortion if Kavanaugh is confirmed.

The ACLU as a matter of policy does not endorse or oppose nominees to the Supreme Court. But we do think it’s essential, given Trump’s promise, that any nominee is questioned extensively and directly about their commitment to the 45-year-old precedent of Roe v. Wade.

Some background is in order. Roe v. Wade made abortion legal in all 50 states by holding that politicians cannot constitutionally ban abortion — except after the point in pregnancy at which the fetus could survive outside the woman’s body. The 1973 decision nullified abortion bans across the country, but it provided imperfect protection for abortion access. Shortly after the decision, the Supreme Court held that politicians may exclude abortion coverage from Medicaid and may require parental or judicial involvement in a minor’s abortion decision. Those rulings cruelly placed abortion out of reach for many people — especially low-income women and, disproportionately, women of color.

Then, in 1992, in Planned Parenthood v. Casey, the Supreme Court opened the door to myriad additional restrictions on abortion access. In that decision, the court reaffirmed the core holding of Roe — that politicians cannot ban abortion — but ruled that states may restrict abortion as long as those restrictions do not impose an “undue burden” on a woman’s access.

And restrict it they did: Since 2011, politicians have quietly passed more than 400 abortion restrictions. These include laws that shut down all or most of the clinics in a state under the guise of promoting women’s health. Where possible, women, medical providers, and advocates have challenged these laws — and in many cases, lower courts weighed in on their side. In a critical decision, so did the Supreme Court.

In Whole Woman’s Health v. Hellerstedt, the Supreme Court in 2016 struck down two such laws out of Texas: one law that banned abortion unless the physician had admitting privileges at a local hospital, and another that required that physicians perform the procedure in a mini-hospital called an ambulatory surgical center. The five-justice majority, which included Justice Kennedy, relied on the undue burden standard articulated in Casey and ruled that these restrictions were an unconstitutional undue burden because they did nothing to safeguard patient health while shutting down three-quarters of the clinics in the state.

Despite that decision, states across the country continue to pass and defend laws that fail the standard articulated in Roe, Casey, and Whole Woman’s Health. Arkansas and Missouri, for example, are defending laws indistinguishable from the Texas laws the Supreme Court struck down in 2016. But legal advocates have been able to use the Whole Woman’s Health decision to challenge other restrictions, which federal courts have struck down in multiple states.

Where does that leave us today?

Congress, too, could ban abortion. If that happened, we would not have a “patchwork” of access: A federal ban would end abortion throughout the nation, and there is nothing states could do to make the practice legal within their borders. While there are not currently enough votes in Congress to ban abortion nationwide, only time will tell who goes to Washington in 2018, 2020, and beyond.

But a new Supreme Court Justice could effectively decimate women’s access to abortion, even without overturning Roe outright. A new Supreme Court could uphold nearly unlimited state restrictions — including the kind of clinic shut-down laws from Texas that the court struck down in 2016. In upholding them, the court could say that it is simply applying the longstanding undue burden standard but deferring to legislative determinations of what is medically justified. In that way, the court would end abortion within the states that pass them — as surely as if the court had overturned Roe and allowed politicians to ban abortion explicitly.

In seven states, there is just a single women’s health center left providing abortion care. The only thing stopping politicians in those states from shuttering those clinics with faux health regulations is the federal judiciary, and if the balance on the Supreme Court shifts against abortion rights, there will be nothing stopping them.

One need look no farther than Texas to understand the staggering impact of this scenario. In 2015, politicians’ draconian, pretend health restrictions shuttered more than half the state’s clinics. Women had to wait weeks for an appointment, drive hundreds of miles or to another state, take more days off work, lose income, find childcare, and arrange and pay for transportation. For many, the process of obtaining safe and legal health care became an onerous, grueling feat — or just flat-out impossible.

Overturning Roe would be catastrophic, but it is not the only scenario in which politicians would be able to shut down abortion care. The court can give them back the power to do so by simply upholding whatever obstacles they throw in a woman’s path.

Brett Kavanaugh and the case of Jane Doe

There is cause for concern that Judge Kavanaugh could do just that. President Trump promised to select justices who would overturn Roe, so even if he did not directly ask Kavanaugh that question, his selection presumably means that the president has reason to believe he would be open to doing so.

Moreover, in the one case Kavanaugh has decided involving abortion, he vacated an order directing that a young woman be allowed to access abortion while in government custody. The ACLU represents Jane Doe, a 17-year-old undocumented woman who came to this country without her parents, was detained by the federal government, and was living in a shelter. While in federal custody, she found out she was pregnant and requested an abortion, but the Trump administration refused to allow her to have one.

After she had been delayed several weeks, a federal court ordered the administration to allow her to get the procedure. The administration appealed and Judge Kavanaugh wrote an opinion that allowed the government to continue to block her from having an abortion for 11 days while the government continued their weeks-long search for a sponsor to whom she could be released (at which point she could get the abortion while no longer in government custody). If no sponsor was approved by that point, Judge Kavanaugh ruled that Jane Doe could go back to the lower court to ask the court to re-enter the order directing the government to allow her to access abortion, but he indicated that that decision could be appealed, further delaying her abortion.

In short, he was willing to tolerate weeks of delay where a woman had decided to obtain an abortion, which pushed her further into her pregnancy against her will. The full panel of the D.C. Circuit quickly reversed Judge Kavanaugh’s opinion, and Jane Doe was able to obtain her abortion.

Given this history and Trump’s promise, it’s imperative that senators press Brett Kavanaugh on whether he intends to protect a woman’s right to real access to abortion. If they don’t do their job, the impact could well be dire, and marginalized communities will pay the steepest price.

Get Kavanaugh's position on abortion on the record 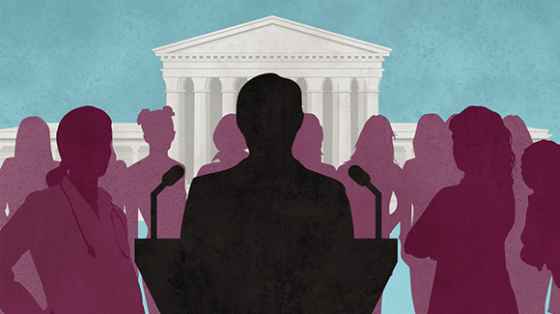 Get Kavanaugh's position on abortion on the record

Florida’s 15-week abortion ban is dangerous for people living in...