The CRC concluded its process on April 16th with the passing of eight amendments that will now appear on the November 2018 ballot. Despite strong opposition from several civil rights and civil liberties organization, the CRC controversially combined (“logrolled”) dozens of  unrelated proposals into eight revised bundled amendments. In order for any of the eight CRC amendments to become law, 60% of those voting on the amendment must vote in favor of the amendment.

The eight CRC Amendments that will appear on the ballot are as follows:

The CRC created ballot titles and simplistic summaries for each of the above that can be found by clicking here.

Two of the CRC proposals (Amendment 6 and 11) significantly impact the civil rights and liberties of all Floridians, and the ACLU of Florida takes the following positions on these CRC Amendments.

Bundled: Proposal 96 (expanding victim rights, establishing constitutional rights for corporations in the criminal justice system, and deleting protections providing that the constitutional rights of the accused shall not be interfered with); Proposal 6 (eliminating deference to state agency interpretations of statutes and rules); Proposal 41(increasing judicial retirement age from 70 to 75).

Brief Summary: Expands and constitutionalizes broadly defined “victims” rights (including constitutional rights for corporations), deletes current constitutional language that provides that nothing shall interfere with the rights of the accused; eliminates current standard of judicial deference to state agency interpretations of its statutes; increases judicial retirement age from 70 to 75.

Position: Oppose for the reasons stated above. 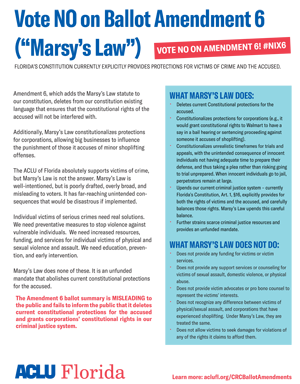 Position: Support because it deletes unconstitutional provision concerning prohibitions on alien land ownership and because it would modify Florida’s constitutional “savings clause” to allow for amendments of criminal statutes to apply retroactively. 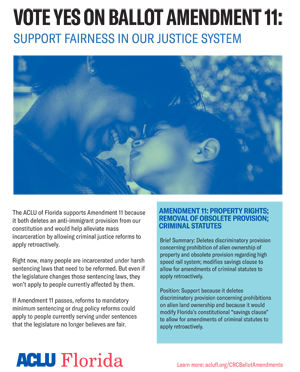