Today we celebrate the Fourth of July and the 243rd anniversary of our nation. Ours is a country founded on the principles of freedom and self-determination. It took some time – and the passage of many amendments and federal intervention – to address the suppression of the vote of Black people and women. But we eventually embraced the tenet of “one person, one vote.”

Although the tenet “one person, one vote” illustrates all citizens have a right to vote in our country, politicians in Florida, and elsewhere, remain committed to voter suppression. The passage of Amendment 4 demonstrates Floridians grew tired of the state’s long history of voter suppression.

In November, 64.55 percent of Floridians voted for constitutional Amendment 4, which returned the ability to vote to any citizen who had previously committed a felony but had finished their prison sentence, including parole and probation.

In doing so, voters abolished a corrupt system of disenfranchisement that left as many as 1.4 million citizens without access to the ballot box. That corrupt scheme, which dated back to the Civil War era, disproportionately disenfranchised African Americans.

Enter Gov. Ron DeSantis and the majority in the Florida Legislature. Last Friday, DeSantis signed SB 7066, a bill that blatantly undermines the will of Florida’s voters.

The new law dictates that returning citizens must pay various outstanding fees and fines imposed by the court system, often amounting to hundreds of thousands of dollars, even though Amendment 4 automatically conferred these returning citizens the right to vote.

Under SB 7066, a person unable to pay these excessive and arbitrary civil fines cannot vote.

The day DeSantis signed SB 7066, the American Civil Liberties Union (ACLU), ACLU of Florida, NAACP Legal Defense Fund and the Brennan Center for Justice filed a lawsuit in federal court to block the new law. The complaint quotes the U.S. Supreme Court regarding the seriousness of this government-imposed deprivation of a long-recognized right:

“No right is more precious in a free country than that of having a voice in the election of those who make the laws under which, as good citizens, we must live,” the Court said in 1964. “Other rights, even the most basic, are illusory if the right to vote is undermined.”

The new law clearly and unequivocally violates several amendments to the U.S. Constitution. For example, the 24th Amendment states explicitly that the ability to vote “shall not be denied or abridged . . . by reason of failure to pay any poll tax or other tax.” In this case, attaching the right to vote to the payment of court fees amounts to a poll tax.

The 15th Amendment prohibits denying people the right to vote because of their race or ethnicity. Yet, the law that Gov. DeSantis just signed disproportionately affects African Americans, because of the higher rates of police stops, arrests, prosecutions, and convictions of African Americans in our broken criminal justice system.

This disproportionate impact is hardly a secret – certainly not to legislators, despite the best efforts of the legislation’s sponsors to avoid any meaningful inquiry into who would be affected by their bill. That means that it is unlawful because it was motivated, at least in part, by racial discrimination.

In passing SB 7066, the Florida Legislature violated state law by contravening the will of Florida voters. In 2010, the Florida Supreme Court said that while the Legislature may “supplement, protect, or further the availability of the constitutionally conferred right . . . the Legislature may not modify the right in such a fashion that it alters or frustrates the intent of the framers and the people.”

SB 7066 keeps hundreds of thousands of people from voting. The rejection of the public will isn’t a lamentable side-effect of the bill, it is the entire point of it.  That was amply demonstrated by Gov. DeSantis, who, when signing the bill, issued a statement labeling the passage of Amendment 4 a “mistake.”

Unfortunately, disenfranchising minority voters is nothing new for Florida.

In 1889, Florida became the first state to institute a poll tax. It was quickly followed by literacy tests and other Jim Crow era barriers designed to keep Black people from voting. Today, we hear of Russian attempts to skew our elections, but we have suffered homegrown attacks on fair balloting for all too long.

As we celebrate the birth of our democracy this week, it’s imperative that we decry the violations of that ideal in Florida and pledge to fight to end voter suppression once and for all.

This op-ed first appeared in The Florida Phoenix 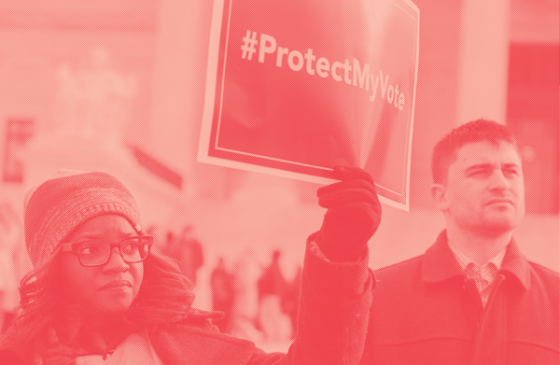