For over a year, the American Civil Liberties Union (ACLU) has documented U.S. Customs and Border Protection (CBP) agents boarding the buses of FirstGroup’s subsidiary Greyhound. Multiple incidents across the US have resulted in the harassment and racial profiling of people of color and families — regardless of immigration status — as well as the detention and deportation of Greyhound customers.1 This behavior is unacceptable, and it is within the power of FirstGroup Plc to change it. We are writing to you today because, despite our repeated outreach to CEO of Greyhound Mr. David Leach regarding these ongoing and widespread immigration raids in the guise of CBP’s “transportation checks,” the issue has not been resolved. We are now asking you to intervene to end this practice by your subsidiary so that you can live up to your company’s stated values. FirstGroup’s code of ethics includes: “keeping customers at the heart of everything you do” and a “zero-tolerance approach to any human rights violations” within your company or by your business partners.

Due to the Trump administration’s repeated attacks on immigrants, there is an escalating humanitarian

crisis in the United States around the treatment of immigrants and refugees. Greyhound’s continued practice of allowing CBP agents to board its buses and inquire about immigration status upholds and aligns with the Trump administration’s inhumane policies. It also exposes your passengers to frequent violations of their constitutional rights to be free of harassment, warrantless searches and seizures, and racial profiling.

As a private business, Greyhound has a Constitutional Fourth Amendment right to deny CBP permission to board and search its buses without probable cause or a warrant, assuming they are on domestic routes and do not cross formal checkpoints. However, Greyhound has refused to exercise this right or communicate to the Department of Homeland Security, which oversees the CBP, that it will not consent to agents illegally boarding its buses.

Title 8 of the U.S. Code outlines the powers immigration officers, including CBP agents, have to conduct warrantless searches.3 The statute reads that officers can, within a reasonable distance from the border, “board and search for aliens” on “any railway car, aircraft, conveyance, or vehicle.”4 The U.S. Supreme Court has analyzed this and concluded that “Automobile or no automobile, there must be probable cause for the search...In enforcing the Fourth Amendment's prohibition against unreasonable searches and seizures, the Court has insisted upon probable cause as a minimum requirement for a reasonable search permitted by the Constitution.” Therefore, CBP must have probable cause to board and search for immigration infractions.

For almost 100 years, the ACLU has been the primary guardian of liberty in the U.S., working in courts, legislatures, and communities to defend and preserve individual rights and liberties that the U.S. Constitution and the laws of the U.S. guarantee to everyone in our country. We have more than four million members, activists, and supporters and exist in all 50 states in the U.S. including Puerto Rico and

Washington, D.C. In March of 2018, ACLU affiliates in ten states sent Mr. Leach a letter urging the company to end this practice. This followed a specific event in January 2018, when Border Patrol agents boarded a Greyhound bus in Fort Lauderdale and asked every passenger for proof of their immigration status. A passenger recorded a video that went viral, showing agents with “POLICE” emblazoned on their vests, escorting a woman of Caribbean descent in her 60s off the bus.

Our Communication with Greyhound and Nationwide Actions. Between the months of May and June 2018, we held in-person meetings and calls with Greyhound executives, including Tricia Martinez, VP of Legal Affairs. She mentioned that our letter and actions had affected the company’s bottom line, and asked us to hold off public activity while they came up with a response internally. In good faith, we waited, but no response came.

On July 23rd, Ms. Martinez let us know that Greyhound was in the process of crafting a message for customers to alert them of potential CBP searches, and asked us for input. We developed sample language and a list of requests, but Ms. Martinez was unwilling to heed our suggestions or engage in further negotiation.

Our affiliates have held a series of escalating actions to publicly highlight Greyhound’s failures to protect its passengers, including actions outside of Greyhound stations to inform riders of their rights, letters from Members of Congress including Joaquin Castro (D-Texas) and Latino Members of Congress, and the delivery, alongside Congressman Castro, of 200,000 signed petitions to Mr. Leach in October 2018.

Along with our partners, we have also taken steps to protect individual riders subjected to racial profiling and other constitutional violations on Greyhound property. For example, our Southern California affiliate represents a Latinx man, Edgar Solano, who was arrested by CBP in early 2018 while waiting in line to board a Greyhound bus in Indio, simply because “his shoes looked suspicious.”

On November 8, 2018, Robbins Geller Rudmamm & Dowd LLP sued Greyhound in San Diego on behalf of Rocio Córdova, who was traveling from San Diego to Phoenix on Greyhound when the bus was pulled over on a highway to allow CBP officers to interrogate passengers. Córdova filed a lawsuit, accusing Greyhound of violating state consumer protection laws by consenting to racial profiling by law enforcement. The suit seeks a court order barring the alleged practice. In response, Greyhound created a new "Know Your Rights" (KYR) section on their website — however, they placed it in an obscure area of the page. Their spokesperson, Crystal Booker, also mentioned that KYR posters would be displayed in every terminal, but volunteers and partner organizations have reported that these posters cannot be found in many of their terminals.

On January 27, 2019, CBP racially profiled comedian Mohanad Elshieky onboard a Greyhound bus that was headed from Spokane to Portland. Mr. Elshieky, who was granted asylum in the United States in 2018, was detained by CBP officers even after producing valid identification documents demonstrating that he was lawfully present in the United States. Disregarding those documents, the officers interrogated him for 20 minutes, claimed his documents were fake, called him an "illegal," and later released him with a warning that he should have his asylum documents on him at all times. The ACLU and the Northwest Immigrant Rights Project responded swiftly, connecting with Mr. Elshieky and filing a complaint that asserts that CBP officers unlawfully detained and arrested Mr. Elshieky, and seeking damages under the Federal Tort Claims Act (FTCA).

Most recently, Washington State Attorney General Bob Ferguson communicated with Greyhound, in a strongly worded letter, in which he provided “information and guidance to Greyhound so that Greyhound could take immediate action to prevent or reverse potential violations of Washington law.”

This is an ongoing problem, and therefore remains a priority for the ACLU and our affiliates across the country. We are working with elected members of Congress to alert them to Greyhound’s practices and to pass legislation that protects its passengers. We are also communicating with state and local legislators about opportunities to protect passengers in cities, school districts, and counties and to bring to their attention the practices of Greyhound, which may also do business with public entities via their other subsidiaries. When it is necessary to protect passengers, we are also filing lawsuits or supporting other legal actions. Due to the company’s failure to protect its passengers, we are continuing to alert the public through digital communications, articles, public actions and by coalescing the support from other major US civil rights and social justice leaders and organizations.

We will continue this advocacy until the problem is rectified. As a well-regarded global company providing services to millions of passengers on a daily basis, FirstGroup is in a unique position of influence. We are asking that you ensure Greyhound upholds your company values — zero tolerance for human rights violations, a commitment to riders’ rights, and keeping your customers at the heart of everything you do.

We are aware that FirstGroup is looking to sell Greyhound, but we ask that prior to the sale, you illustrate your ethical standards and value for equality by protecting the 16 million passengers who travel on Greyhound annually. Unfortunately, at this time in our country, innocent immigrants and refugees are being used as pawns in a political game to the detriment of their human rights, and the rights of all passengers who are being racially profiled in the process. We ask that you step in immediately to change Greyhound’s policy and refuse CBP agents permission to board buses without a warrant.

Thank you for your consideration. We await your response and urge you to exercise your authority to protect the rights of your customers.

Buses are no place for border patrol 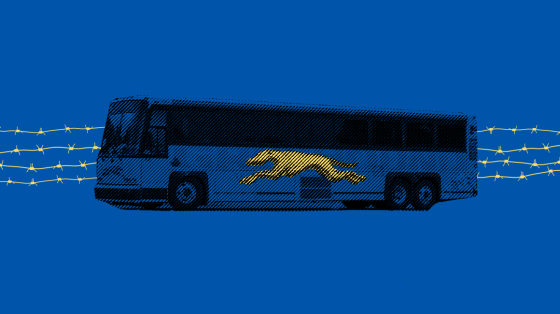