In January 2022, Gabino Medina, who was held at an U.S. Immigration and Customs Enforcement (ICE) detention facility in Seneca County, Ohio, tried to reach me and his immigration attorney several times, but his calls wouldn’t go through. Gabino informed facility officials that he was having issues with his phone account, but was told not to worry — that he would soon be transferred to another facility and his account would be up and running again soon. A few days later, I finally received a call from Gabino. This time, he was in Mexico.

After preventing Gabino from speaking with me and his immigration attorney, the facility quietly sent him on a flight to a country he had not lived in since he was five. Gabino didn’t discover that he was going to be deported until he landed in Mexico, far from all of his friends and family.

Research shows that legal representation can make an enormous difference in the outcome of detained immigrants’ cases.

Gabino had a variety of viable legal defenses to removal, all of which were frustrated by his inability to access counsel. Had Gabino not been denied his legal right to speak with his attorneys, he could still be in the United States.

Unfortunately, Gabino’s story is not unique. The Ohio ICE detention facility where Gabino was detained prevents people from communicating with their attorneys by design. The facility doesn’t allow attorneys to schedule phone calls with clients. When attorneys call the facility, they are told that staff will relay a message to their clients to call them back. It is unclear when and how consistently messages are delivered to clients, and even when they are, detained immigrants can only make costly phone calls that are recorded and monitored.

A recent ACLU research report, “No Fighting Chance: ICE’s Denial of Access to Counsel in U.S. Immigration Detention Centers,” documents pervasive barriers to counsel in ICE detention facilities across the country, where countless people, like Gabino, struggle to exercise their basic rights.

Research shows that legal representation can make an enormous difference in the outcome of detained immigrants’ cases. Detained immigrants with legal representation are 10 times more likely to win their immigration cases compared to those who lack counsel, and are seven times more likely to be released from custody than those without counsel. Yet if they can’t actually communicate with attorneys, their constitutional right to due process is rendered meaningless.

When people in ICE detention cannot reliably communicate with their attorneys, they are left to cope with labyrinthine immigration laws — dubbed by a court and scholars as “second only to the Internal Revenue Code in complexity” –– and other complicated laws defining the rights of people detained on their own. Coupled with frequent language barriers and unfamiliarity with the U.S. legal system, navigating their cases without support can be nearly impossible. 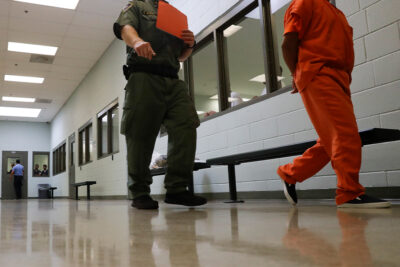 Access to counsel — both the initial step of being able to retain counsel, and the subsequent step of being able to communicate with counsel –– serves as a bulwark against a system where people in ICE detention do not even have a fair chance to assert the rights they are guaranteed under the law.

In examining access-to-counsel conditions at 173 (out of approximately 192) ICE detention facilities across the country, we found almost every method of communication between detained people and their attorneys is severely broken:

These figures and percentages translate to serious and entirely avoidable consequences for detained immigrants seeking to exercise their rights. As an attorney at South Texas ICE Processing Center in Pearsall, Texas reported, “[T]he phone lines are horrible! They have a lot of static and you can barely hear the client, you have to tell them to yell into the phone which is bad because they are not able to have a somewhat quiet conversation with you with all the other detainees in the room with them.”

Lack of access to confidential, private meeting spaces has devastating effects on attorney-client privilege. As an attorney with clients at Adelanto ICE Processing Center in California reported, “It is incredibly difficult to gain clients’ trust and discuss their trauma and fears when guards are walking back and forth and looking in the windows … It creates an atmosphere of hostility and fear.”

At more than 40 ICE detention facilities called, no one ever picked up the phone or operators refused to answer basic questions about attorney access.

By failing to provide privacy for detained clients so that they can safely share their experiences with persecution and violence which caused them to flee and seek shelter in the U.S., ICE ensures they truly have no chance to vindicate their right to asylum under U.S. law.

ICE detention facilities are notorious for abuse and neglect. People detained in these facilities deserve access to counsel so that they stand a fighting chance of returning to their homes in the U.S. or starting a new life. Ultimately, denying people communication with or access to attorneys increases the likelihood that they will be detained for prolonged periods or deported in violation of their constitutional rights, causing additional and needless suffering and heightening the risks that they will face serious injuries or death while detained or after deportation.

That’s why the ACLU is urging the Department of Homeland Security (DHS) to phase out the immigration detention system and invest in community-based social services as alternatives to detention. In the meantime, DHS and ICE must ensure that everyone in ICE detention facilities across the country can reliably contact their attorneys across different methods of communication and visitation.

Four Things to Know About the Supreme Court's Ruling in Egbert v....

How ICE Sidesteps the Law to Find and Deport People

On the Frontlines of the Fight Against Mass Deportation

ICE Program Foments Abuse, Hatred, and Fear — and Makes Us All Less...