Pride Is for You 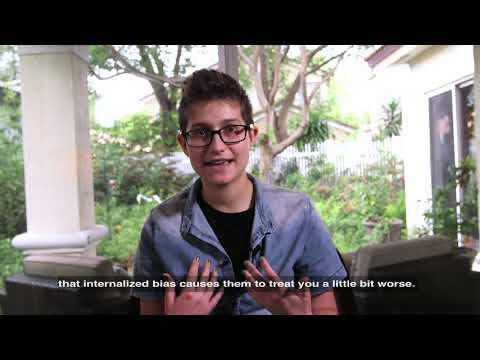 This feature is part of the ACLU of Florida's "LGBTQ+ Youth Activist Project" commemorating Pride Month during the month of June.

"My name is Alexander or Alex. I'm 17 and I live in Broward. I'm an artist, a musician, and sometimes a writer."

Q: How does your work make our community a more inclusive and open place for everyone, regardless of where they come from, how they identify, or who they love?

A: "I do a lot of volunteer work with Black Lives Matter, the Food Not Bombs group, and the Florida Immigrant Coalition.

"For example, there will be a protest, or a rally, and I will take photos at the protest, and I'll put that out on social media. What's interesting about photos at these sorts of events is the event happens and afterwards the photography is what people end up seeing.

"It was after Trump was elected that was when I was kind of beginning to understand myself and my gender identity. And I went to this march and I saw these people who were gender non-normative. I had previously not seem people like that, and it kind of made me realize that was okay."

Q: What do you see as the most pressing issue currently affecting LGBTQ youth? What do you think will help alleviate it?

"It's interesting now because we've obviously taken a lot of strides. We have gay marriage, we have more representation in media, and that's really great. But we also have this sort of cultural backlash.

"People who are not loud about it and that almost makes it more dangerous. Those are your store clerks, your hairdressers, your doctors, that when they know you are part of the LGBTQ community, that internalized bias causes them to treat you a little bit worse.

"When I came out at my school, they said I was the only 'trans kid' they had ever had, and so I had to deal with navigating a school that wasn't set up to receive trans kids and accomodate to their needs. But because I was able to do that, to pave that path, I believe that made it easier for people to follow in my footsteps.

"Parental support, emotionally, it's a lot. Because it's scary to come out, even if you know that your parents are completely accepting. But when your parent isn't accepting, it's that much more frightening and also dangerous. Studies show that kids who have parental support are less likely to self-harm or commit suicide."

Q: What message of encouragement would you like to send to LGBTQ youth who may not have the love and support to know that they are worthy and capable of being themselves, regardless of circumstance?

A: "So, to the kids who are not out because they feel it's dangerous to be out, or because they are not ready yet: That's okay.

"And you are nor more or less trans or gay or bi or lesbian, or whatever you identify as than the people who are out and celebrating 'Pride.' And 'Pride' is still for you.

"I see you, I hear you. We were all there. And it does get better."

Alex Grindle is a student activist in the greater Fort Lauderdale area.

How the Impact of Bostock v. Clayton County on LGBTQ Rights...

What You Need to Know About ACLU Artist Ambassadors, Including...