Faith, Law and Reparations – A Call Whose Time Has Come

Many have been surprised and confounded by the appearance of “reparations” as a point of serious discussion for the 2020 presidential debate. For a few, those whose personal family histories intersect with chattel slavery and/or who have served as next generational holders of the demand for reparations, this is a moment in history whose time has finally come.  And let us not miss the symbolic meaning of a long overdue U.S. congressional hearing on reparations occurring on Juneteenth, 2019.

Juneteenth is the remembrance of the day of African-American freedom, in which many heard for the first time the reading of the Emancipation Proclamation. And 2019 is also the 400-year anniversary of the slave ship, “White Lion,” landing at “Point Comfort,” Virginia, with 20-plus surviving enslaved Africans aboard. Finally, for my family, 2019 is the centennial in which our family was again dismembered, seeking refuge from the terror of the 1919 Elaine, Arkansas, race massacre. My great uncle fled the U.S. and expatriated to Brazil with his young family. We now have six generations of family members in Brazil.

With this much injustice still unresolved, the quest for healing and reparations must go on.

Reparations, as a point of faith and law, is not a new conversation. In 1894, Callie House, the mother of the reparations movement in the United States, said, “We deserve for the government to pay us as an indemnity for the work we and our fore parents was robbed of from the Declaration of Independence down to the Emancipation” and that“[m]y whole soul and body are for the slave movement and I am willing to sacrifice for it.”

Mrs. House, the Rev. Isaiah Dickerson, and the Rev. Augustus Clark founded the National Ex-Slave and Mutual Relief Bounty and Pension Association. Ms. House had been born in a camp of freed slaves. Between 1894 and 1915, there were over 200,000 members throughout the South and active chapters in Oklahoma, Kansas, Indiana, Ohio, Illinois, and New York.  The organization introduced some five bills and claims against the U. S. government and the Treasury Department, including a $68 million suit. In 1917, after a 10-year postal investigation in which she was exonerated, she was sentenced to one year for fraud for using the mail to distribute one leaflet. 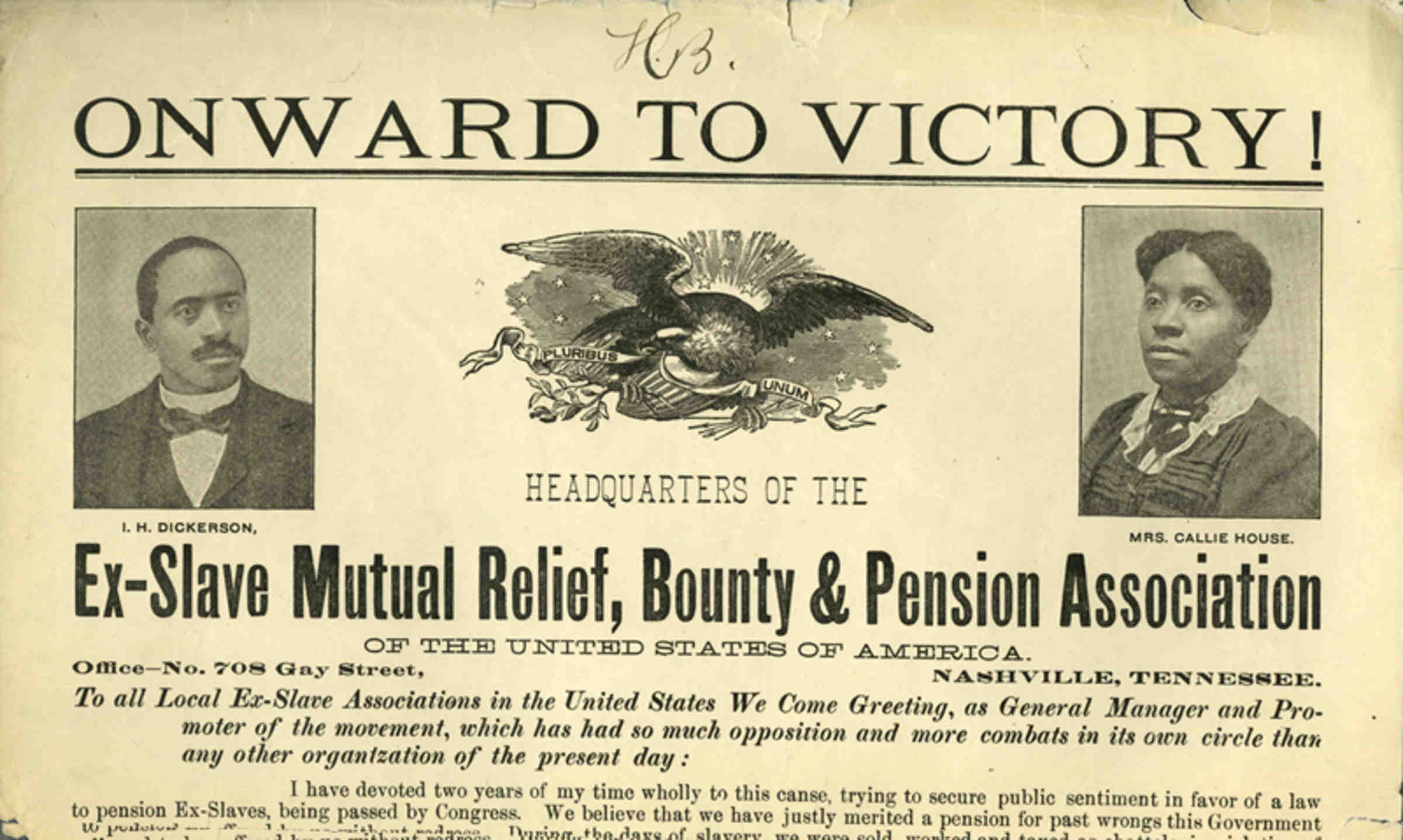 Since the late 1800s, many have attempted to promote the claim for reparations. Though seldom quoted, in 1963, Martin L. King noted: “While no amount of gold could provide adequate compensation for the exploitation of the Negro American down through the centuries, a price could be placed on unpaid wages.”

In May 1969, Rev. James Foreman, supported by other African-American faith leaders, walked down the church aisles at the historic Riverside Church in New York City and read a “Black Manifesto” that had been adopted in April of the same year by the National Black Economic Development Conference in Detroit. The manifesto demanded $500 million as a “beginning of the reparations due us as people who have been exploited and degraded, brutalized, killed and persecuted.”

In 1989, U.S. Rep. John Conyers (D-Mich.) took the question of American slavery to the heart of the national political process with the proposed resolution to establish a study commission on American slavery. H.R. 40 remains a resolution, introduced into this Congress by Rep. Sheila Jackson Lee (D-Texas). Moreover, I along with many other U.S. citizens of African descent went to South Africa and not only witnessed America’s refusal to officially participate in the 2001 UN World Conference Against Racism, but we also experienced the unsuccessful U.S. efforts to derail African and Caribbean nation-states from supporting the declaration that “the Trans Atlantic Slave Trade was a crime against humanity.”

And, here we are June 19, 2019, in the halls of Congress, pricking the mind and soul of America to do what is right about the human rights of people of African descent in this nation in the ongoing quest for reparations! In the words of the legendary lawyer and jurist, Thurgood Marshall, “Sometimes history takes things into its own hands.”

In his classic novel, “Juneteenth,” Ralph Ellison tells a story of a former jazz musician preacher, Rev. Hickman, and the son he raised who betrayed his commitments. Powerful words in the novel speak to today’s time: “Blood spilled in violence doesn’t just dry and drift away in the wind, no! It cries out for restitution, redemption.” Ellison also had questions that continue to haunt us today: “How can the many be as one? How can the future deny the Past? And How can the light deny the dark?”

These poetic words penned from the hand of Ralph Ellison are a glimpse into the culture, faith, and hope that propelled Thurgood Marshall and so many others over the years to speak life into the movement that has brought H.R. 40 to the forefront of today’s American political debate. These poetic words prophetically captured the significance of me being able to organize a pilgrimage several months ago of over 700 clergy leaders to visit the Equal Justice Institute in Montgomery, Alabama. There the sacred spaces and grounds of the Legacy Museum: From Enslavement to Mass Incarceration and the National Memorial for Peace and Justice commemorated those African Americans — men, women, and children — who were lynched. Yes, we celebrated the vision and tenacity of attorney Bryan Stevenson to make America look at itself. 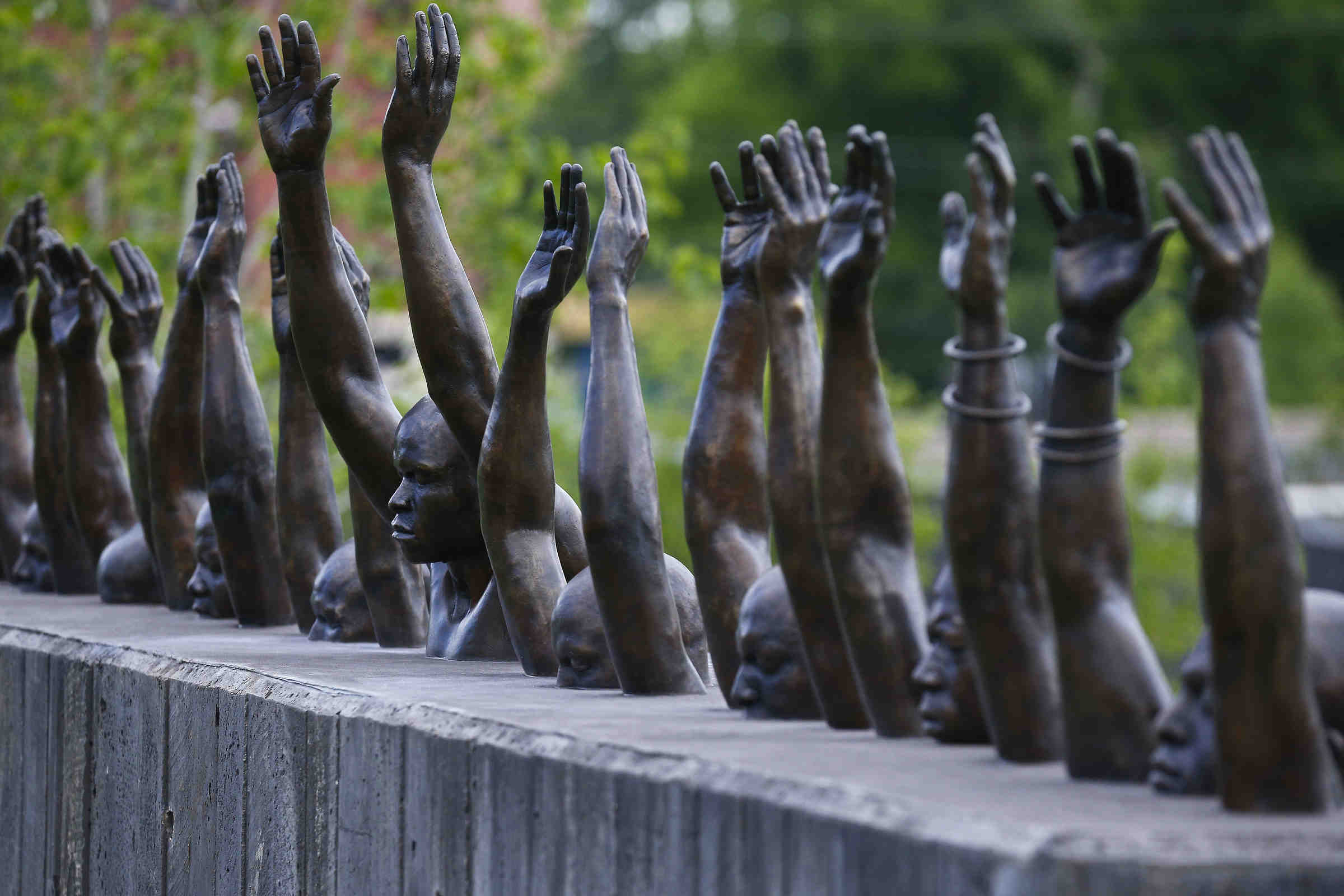 In an era in which xenophobia and divisive, hateful, and racialized rhetoric and policies are spewing from national, state, and local centers of power, H.R. 40 is creating a path to e pluribus unum (out of many, one) and shedding the light upon centuries of denial and the real fake news of America’s past: U.S. prosperity is the result of rugged individualism and American exceptionalism.

As general secretary of the Samuel DeWitt Proctor Conference (SDPC), a United Nations nongovernmental organization, I have engaged other faith leaders and traditions in multiple convenings on four continents in the past six months, interrogating the efficacy of reparations to transform and help bend the arc of the moral universe towards justice. At the heart of these conversations is the acknowledgment that reparations are more than a matter of money. True reparations also involve a process of intentional healing for those who experienced the harm and for those who were enriched by the harm, which sets right and repairs the institutional structures, policies, and practices which sustain the harm.

In a time of intensified Afrophobia and xenophobia, many faith communities are turning inward to identify, name, and seek reparatory justice for their complicity in the trans-Atlantic slave trade and the damage it has wrought on generations of people of African descent. The late theologian, Dr. Katie Geneva Canon echoes Justice Marshall’s words: “Even when people call your truth a lie, tell it anyway.”

As the trans-Atlantic slave trade system and its aftermath were global, so have been the documentable consequences. SDPC just held a truth-telling commission in Elaine, Arkansas, around the consequential damages and harm done to generations of Black families after the Elaine Massacre of 1919. The poignant stories of killings of scores of Black people in a church, continued massacres throughout the county, acres of land and cotton theft, federal troops being complicit in the murdering, false imprisonment, and fake trials of the victims undergird the facts and oral narratives impacting multiple generations.

Indeed, as Callie House and Rev. Dr. King said, there is no amount of money that can ever compensate for the dismembering of families, cultures, histories, and opportunities. There is no amount of money that can fully atone for the terror and trauma that has been endured and passed on through generations. What can happen is that all of us embrace a call whose time has come. What can happen is that we break the silence and stand for right and the rights of others. That is why I stood at the border in McAllen, Texas, and why next month I will join others for the “Year of Return” to Ghana, West Africa. Many argue that the reparations issue is too complex, and therefore remedies and restitution cannot be implemented through the judicial system.

I beg to differ!

Where we go from here is being discussed at the global, national, and local levels in ecumenical and interfaith circles. In the Christian sacred text, the narrative of the tax collector Zacchaeus (Luke 19: 8-9) informs faith leaders and communities, offering parallels and possibilities for remedy. Zacchaeus found peace by giving away possessions to the poor, atoned for cheating others, and paid back four times what he gained.

The Zacchaeus narrative has transformational impact by acknowledging real transgenerational harm done, owning up to benefits inured, and seeking to lead the way to reparatory justice and reparations. At the intersection of faith and the law in today’s context, advocating for tax justice and connecting the social and ecological damage and debt that continue to manifest are principles of justice that can lead down pathways of reparatory justice, reparations, atonement, and human rights protections for ever more.

The late theologian, James Hal Cone said: “black people will not be silent as our children are thrown into rivers, blown into eternity, and shot dead in the streets. Black lives matter. God hears that cry, and Black liberation theology bears witness to it.”

I will continue to bring truth, light, and healing to my Black and white students who often feel cheated, betrayed, and disillusioned when they understand how America’s refusal to acknowledge its past makes them heirs to a nation at war with itself.

Indeed, it behooves all of us to stay woke, show up, be truthful, be courageous, and be prepared to create new paths. At local, national, and global levels, the SDPC and I are challenging the faith community to establish entrepreneurial development, solicit contributions, and distribute trust and investment funds in ways that support the 10-point plan for reparatory justice of the National African American Reparations Commission (NAARC).

1. Formal Apology and Establishment of a MAAFA/African Holocaust Institute

2. The Right of Repatriation and Creation of an African Knowledge Program

3. The Right to Land for Social and Economic Development

6. Education for Community Development and Empowerment

10. Repairing the Damages of the “Criminal Injustice System”

NAARC will continue to amplify the voices for reparatory justice and reparations. We are pleased to be in partnership with the ACLU in its efforts to encourage greater discourse around reparations.

In short, justice looks like the establishment of the likes of a “Marshall Plan” after World War II — a plan and fund that does not take America back but resets the terrain for America’s future to be an authentic state of “equality and justice for all,” to live up to its founding principle, E pluribus unum.

Rev. Dr. Iva E. Carruthers serves as founding general secretary of the Samuel DeWitt Proctor Conference, Inc., an interdenominational Black church network of congregations, clergy, and lay leaders as well as a United Nations nongovernmental organization. She is a commissioner of the National African American Reparations Commission. She is professor emeritus at Northeastern Illinois University, co-producer of educational television and software programs, and published author in the areas of sociology, technology, and theology. She holds a Ph.D. degree in sociology from Northwestern University, a Masters of Theology from Garrett Evangelical Theological Seminary, and has been the recipient of several post-doctoral appointments, awards, and honors