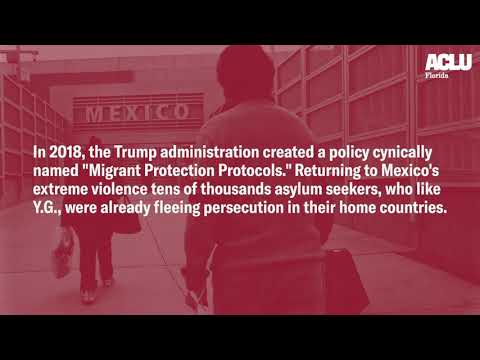 In June 2021, the Biden administration ended former President Donald Trump’s unlawful “Remain in Mexico” policy. The ACLU had fought this disgraceful policy from its inception. Here in Florida, we sued the federal government on behalf of Cuban and Central American  asylum seekers who were impacted by its sloppy implementation.  We were successful in having them brought to Florida and to safety, without delay, to seek asylum, consistent with our country’s decades-long commitment to this fundamental legal norm. They are now part of our community. Unfortunately, on Aug. 25, the Supreme Court ordered the federal government to restart the program while courts review the procedures that led to its termination.

Such court decisions are, sadly, too often blind to the faces of the people who stand to suffer their consequences.

Our client,  Y.G., fled Cuba in 2019, undertaking a harsh and perilous journey in pursuit of freedom in the United States. Little did she expect, after arriving at the border and patiently awaiting her shot at requesting asylum, that it was  U.S. policies that would expose her to violence the likes of which she had never experienced. “Remain in Mexico” meant she would be forced to survive on her own in one of the most dangerous areas in that country, despite being eligible for assistance in Miami, where her U.S. citizen family members stood ready to help.

Finally, in April 2021, after the new administration resolved to end the humanitarian disaster created by its predecessor’s anti-immigrant policies, Y.G. was paroled into the United States to pursue her asylum case. It took her nearly two years in Mexico, during which she endured brutal assaults and countless indignities on account of her being a transgender person.

Such is the fate of the thousands of individuals who were subjected to the "remain in Mexico" policy that the Supreme Court has now ordered the government to preliminarily reinstate.

Fortunately, the Biden administration still has the option to revise its procedures and simply re-terminate the program. This is the decision it must be urged to take, if it is to meet its commitment to rebuild an asylum system that ensures fairness for all.

ICE Program Foments Abuse, Hatred, and Fear — and Makes Us All Less...

Trump’s Remain in Mexico Policy is at the Supreme Court. Here’s...

ACLU of Florida Files Complaint Against ICE Detention Center for...