ACLU of Florida at the RNC: August 28 - Volunteers and Voter Suppression

On Tuesday, August 28, the Republican National Convention in Tampa fully got underway, and the ACLU of Florida had volunteers on the ground to make sure people knew their First Amendment rights. Our volunteers were fantastic in their sheer numbers, in their work ethic and in their enthusiasm for protecting and celebrating the Constitution.

Most of our volunteers met at our Tampa office in the morning for a quick orientation before heading out to the downtown area to begin distributing information and making contact with protesters. We all collected materials at our mobile resource center, then three groups of volunteers went out to different areas of protest activity – one group to the “Romneyville” camp, one to the official march staging area, and one to the “public viewing area,” the 2012 RNC’s answer to earlier conventions’ “First Amendment Zone.”

The after-effects of Tropical Storm Isaac and the condensed convention schedule were still having an impact on the number of protesters out on the streets, but our volunteers made contact with multiple groups of demonstrators and made sure that they received our First Amendment Toolkits.

One group of volunteers even came across a group from Westboro Baptist Church and a surrounding group of counter-protesters. The First Amendment, after all, protects everyone’s speech, even groups diametrically opposed to one another.

In the evening, staff and volunteers attended the “Rally and March Against Voter Suppression” at Centennial Park in Ybor City, a district known for its arts and nightlife to the northeast of downtown Tampa and site of many official and unofficial RNC parties.

Our board president, Ret. Col. Mike Pheneger was invited to speak to the crowd about our work fighting voter suppression in Florida (Note: by watching video, YouTube and Google will put a permanent cookie on your computer). But as with every protest event that our staff and volunteers attended, our primary purpose was to inform everyone about their First Amendment rights. 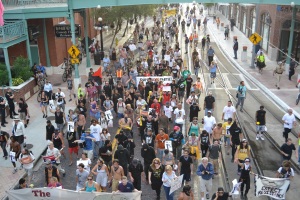 Even in their reduced numbers, it was an impressive display of First Amendment activity on the second official, but first full, day of the Republican National Convention.

(Note: Images or descriptions of protests during the Republican National Convention do not represent an ACLU of Florida endorsement of the individual, organization or message. The ACLU of Florida is in Tampa to promote the First Amendment rights of all groups.)

ACLU of Florida statement on passage of senate bill that censors...

ACLU of Florida Statement on Passage of House Bill Obstructing the...

How a Cruel Criminal Justice System Has Prolonged the Tragedy...