Voting is the cornerstone of our democracy. Everyone should have the right to exercise their voices at the ballot box.

The ACLU of Florida strives to expand and protect voting rights across Florida in the courts and in the streets. While politicians across the country pass laws to suppress voting rights by creating barriers to registration, implementing cutbacks on early voting, and enacting strict voter identification requirements, the fight for voting rights remains as critical as ever. We must combat these attacks on Floridians’ right to meaningfully participate in our democracy.

We envision a state where all people have equal and unencumbered access to make their voices heard at the ballot box.

Voter suppression among communities of color, students, disabled people, and the elderly, persists throughout Florida’s history. After the Civil War, Florida and other Confederate states developed endless schemes to keep Black people from voting by enacting Jim Crow laws. Those machinations included literacy tests, poll taxes, and unfair residency requirements. Florida lawmakers also created the Black Codes.  These laws made it easy for the state to convict Black people of felonies, even for crimes as minor as vagrancy. A person convicted lost their voting rights and could only regain them by petitioning the governor, which effectively blocked almost all Black Floridians from voting permanently.

Florida must end overcriminalization; ensure fair and constitutionally sound treatment of all people; remove barriers to reentry; and increase government transparency and accountability.

The ability to vote should not be based on the size of one’s bank account.

In November 2018, Floridians overwhelmingly took the nation’s most historic step forward regarding voting rights in more than a generation. With 65% of Floridians’ approval, Florida adopted Amendment 4, which automatically restored voting rights to eligible returning citizens, excluding those convicted of murder or a felony sexual offense. Amendment 4’s adoption signaled Florida’s intent to end lifetime disenfranchisement for most returning citizens.

Amendment 4 is clear: when your sentence is finished your voting rights are restored and you may register and vote.

Amendment 4 is clear: when your sentence is finished your voting rights are restored and you may register and vote. Approximately 1.4 million returning citizens should have the right to vote in Florida thanks to the passage of Amendment 4. This historic occasion is the greatest expansion of voting rights in the U.S. since the 26th Amendment lowered the voting age to 18.

In 2019, Florida’s legislature passed, and the governor signed into law, a bill designed  to nullify Amendment 4’s chief purpose and undermine the will of the more than 5 million voters who approved Amendment 4. The new law, SB7066 punishes people based on their wealth by forcing those with past felony convictions to pay all their legal financial obligations before their voting rights are restored, or face disenfranchisement. Ordinarily, courts assess crippling legal financial obligations that most simply cannot pay after they complete their sentence. SB7066 disenfranchises most of those whose right to vote was restored by Amendment 4.This poll tax violates the 1st, 14th, and 15th Amendments; the constitutional prohibition on poll taxes; and the ex post facto clause of the U.S. Constitution. In response, the ACLU of Florida and partners filed a lawsuit challenging this unconstitutional law. Poll taxes are indisputably illegal and have been for decades. They were created across the U.S. after the Civil War to deny African-Americans the right to vote, and they did so successfully until the United States Supreme Court struck them down as unconstitutional and therefore illegal.

The ACLU of Florida is committed to invalidating this poll tax law, SB7066, and to ensuring all Floridians whose rights were restored under Amendment 4 have the ability to register and vote.

The state of Florida, in conjunction with each of its 67 counties, should guarantee the greatest access to the polls for all eligible voters.

In Florida, simple local election administration reforms can ensure that every single eligible voter  has access to the ballot box. Floridians lead busy lives and need early voting sites open as many days, and for as many hours as possible in accordance with Florida statutes.

Increasing early voting across the state is one way Florida can ensure more participation in elections.

Increasing early voting across the state is one way Florida can ensure more participation in elections. State lawmakers should create a schedule of early voting days and early voting hours – preferably starting two weeks before an election – and apply them uniformly throughout Florida. In the absence of such legislation, county supervisors of elections should maximize access to the ballot box through expansive early voting schedules.

Florida should work to encourage participation by students and young people by placing polling places on college and university campuses.We should provide funding to county supervisors of elections to ensure that polling places are located to provide easy access to all voters. Special attention must be paid to providing voting sites in communities serving disabled people,  people of color, and students, all of whom have historically been denied equal access to polling places.

The ACLU of Florida is committed to expanding voting access in Florida by ensuring local election administration officials make precincts genuinely accessible to all Floridians, mandate that early voting days and hours are at the maximum allowable in all 67 counties, authorize election day voter registration, and ensure all people have access to a ballot in whatever language they speak.

Florida should follow the lead of other states and expand opportunities for all Floridians to register and vote.

The ACLU of Florida is committed to ensuring Floridians are able to register to vote on Election Day.

Unlike many other states, Florida prohibits qualified voters from registering and voting on Election Day and has no system to facilitate voter registration when a person obtains a driver’s license, state-issued ID card or registers a car. All eligible Floridians should be able to register and vote on Election Day.

Across the board, people participate more in states that have Election Day registration than this purely arbitrary, bureaucratic red tape of a deadline. Floridians need the same access to the ballot box as citizens from other states.

The ACLU of Florida is committed to ensuring Floridians are able to register to vote on Election Day.

To ensure all Floridians have equal access to the ballot box, the ACLU of Florida is committed to:

Invalidating the poll tax law, SB7066, and ensuring all 1.4 million Floridians are able to register and vote in Florida by:

Expanding voting rights and participation in elections through passage of a statute or constitutional amendment adopting Election Day registration. 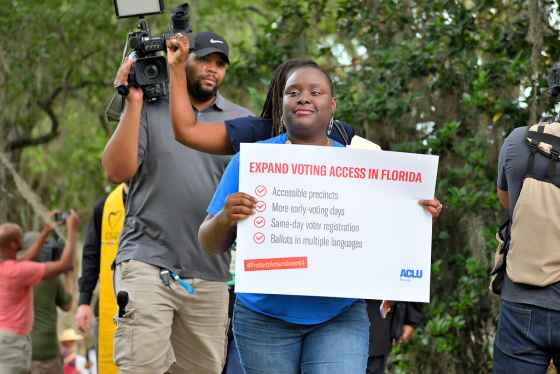 Let Florida Vote: Coronavirus Is Only the Newest Barrier to Voting...

Let Me Vote: My Voting Rights as a Blind Man are the Same as...

Vote By Mail in Florida

Be an ACLU of Florida Justice Voter: 2020 Information Center

Lives are at Stake. Will Congress Act?

Voting by Mail is Essential for Voters with Disabilities, but it’s...