Every person has guaranteed rights under the U.S. Constitution.

When the government has the power to deny legal rights and due process to one person – everyone’s rights are at risk.

Life, liberty and the pursuit of happiness are rights guaranteed to all people in the United States through the Constitution, yet, we know that those rights and privileges have been historically and systematically denied to immigrants, women, people of color and other marginalized communities.

Anti-immigrant laws that weaponize programs against lawfully present immigrants and their families, separate families, harm DREAMERS, require local resources to be spent on enforcing immigration law must be ended. Cruelty is not an immigration policy. Policies that make Florida a “show your papers” state are un-democratic and do not align with our values.

In Florida, one out of every five people are born outside of the U.S. making the state one of the most diverse in our country. It is critical that every single person in our state is able to live, work and travel without fear of violence, harrassment and discrimination. As a state with a vibrant and unique immigrant community, we must ensure the movement for immigrant justice is a reality in Florida.

At the ACLU of Florida, we are challenging laws that deny immigrants, regardless of their status, access to due process and other legal rights; laws that impose indefinite and mandatory detention; policies that codify racial profiling into law and indiscriminately target people of color; and laws that discriminate on the basis of nationality.

Florida should be a place of opportunity.

Local counties and jurisdictions should not have to divert limited resources to enforcing immigration law.

Our communities and businesses should not bear the brunt of the federal government’s failure to implement comprehensive immigration reform.

For decades, politicians have failed to address our broken immigration system—and in 2019,and certain state lawmakers have made it their mission to pass laws that separate families, codify racial profiling into law, and instill fear in our communities. By passing anti-immigrant policies, like Senate Bill 168, they have mandated that local counties and governments spend their already limited resources on enforcing immigration policies, which is the job of the federal government.

At the ACLU of Florida, we are committed to challenging SB 168 and ensuring that all people in Florida have equal access to due process rights—regardless of immigration status. We will achieve this by limiting the implementation of SB 168 and supporting legal challenges that repeal the bill.

SB 168 We have seen how ICE’s broken detainer system has wrongfully disrupted the lives and families of South Floridians—and we will now see SB 168’s devastating impact statewide.

Across the country, and especially in Florida, Border Patrol agents are boarding buses without warrants and subjecting riders to arbitrary interrogation and detention because of their skin color, accent or attire.

We are also focused on ending unconstitutional ICE and Custom Border Patrol (CPB) practices in Florida, including  ending prolonged pretrial detention for ICE detainees, reforming immigration bail proceedings to no longer disregard the ability to pay and stopping CBP transit and traffic stops, which involve racial profiling and violate the Fourth Amendment.

Prolonged detention is cruel and unnecessary. It makes it nearly impossible for individuals to fight their cases—including those with legitimate claims for legal status in the United States. The indefinite detention of immigrants violates our most basic Constitutional principles. This overuse of incarceration not only shatters immigrant families, but also squanders taxpayer money.

Putting people in cages because they cannot afford bail is an affront to decency, dignity, and fairness. Unreasonable bonds for detained immigrants, including asylum seekers, violates the due process and equal protection guarantees of the Fifth Amendment and the Eighth Amendment’s Excessive Bail Clause.

Passengers and driver’s alike are protected by the Fourth Amendment from racial profiling and unreasonable government searches and seizures — regardless of immigration status.

We are committed to securing the passage of local ordinances that reduce collaboration between ICE and local law enforcement that impact immigrants’ and communities’ rights. Immigrants make up a quarter of the labor force in Florida. Instead of stoking fear with counterproductive policies like SB 168, lawmakers should be focusing on fostering community, empowering our economy, and creating solutions that work for everyone. Members of our communities should not have to live with the fear of being stripped of their livelihoods. Florida communities and businesses should not bear the brunt of the federal government’s failure to implement needed immigration reform.

To ensure the right to due process and equal treatment of all Floridians remain intact, the ACLU of Florida is committed to:

Developing local policy protections that reduce local collaboration with the denial of immigrants’ rights, by: 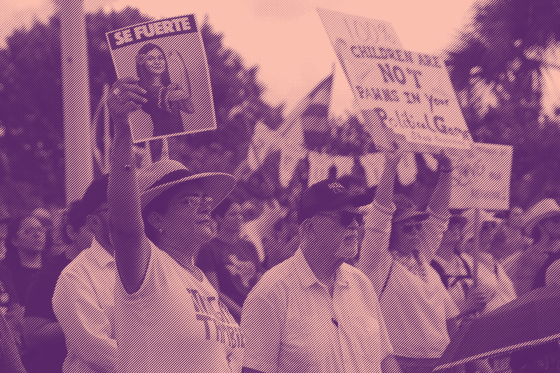 Undocumented Youth Won on DACA, but Trump’s a Sore Loser. So What’s...

Students, Colleges, and Universities Win Against the Trump...

After Years of Advocacy, the House of Representatives Finally Cuts...

ACLU Statement on the Supreme Court’s Decision to Uphold DACA