The U.S. Government Tracked, Detained, and Interrogated Journalists. We’re Suing on Their Behalf.

As part of a coordinated effort that undermined the freedom of the press, the U.S. government tracked, detained, and interrogated journalists who were reporting on conditions at the U.S.-Mexico border. Now, we’re suing on their behalf to defend their First Amendment rights.

Together with the New York Civil Liberties Union and the ACLU of San Diego & Imperial Counties, we’re representing five photojournalists who traveled to Mexico in late 2018 and early 2019 to document the experiences of people traveling by caravan towards the U.S.-Mexico border. Their photographs were subsequently published by news outlets such as The New York Times and The Intercept.

On multiple separate occasions, border officers detained each journalist as they sought to return to the U.S. They interrogated the journalists about their coverage of the caravans of people traveling, and asked them about their observations of conditions at the U.S.-Mexico border, including in shelters. A couple of the journalists were also presented with a book of headshots and asked to identify people they recognized. Some of the journalists were forced to disclose the photographs they had taken in Mexico to border officers, and one officer captured some of these photos with a cell phone.

The interrogations and searches were part of a concerted government effort. A secret government database leaked to the public in March 2019 revealed that the five journalists were specifically targeted as part of a broad group of people including lawyers, a pastor, and immigration advocates working at the southern border. Reporting on the database also revealed that the U.S. government coordinated with Mexican authorities to monitor these individuals.

The database contained the photos and personal information of the journalists in our case, including their name, date of birth, the fact that an alert had been placed on them, and a notation of whether they had been subjected to interrogation. Three of the photos were crossed out with a bold X on them. A fourth, which wasn’t crossed out, stated: Pending Encounter. 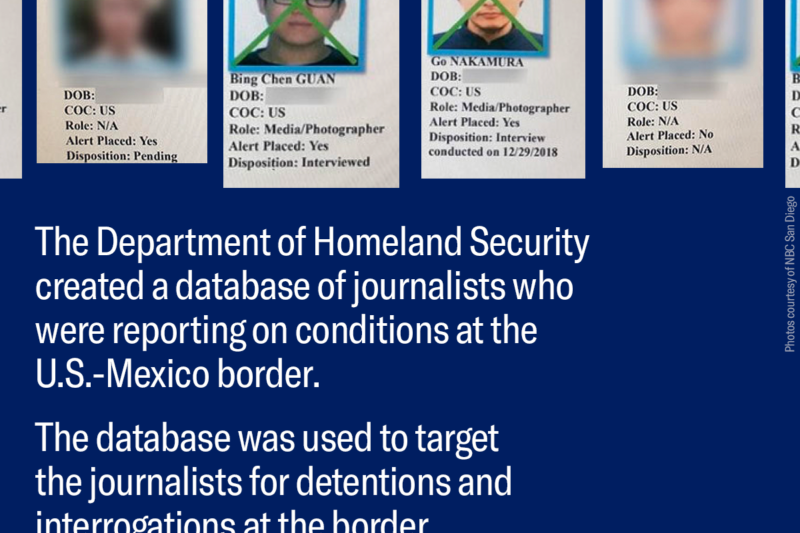 One of the journalists in the case was also denied entry to Mexico during the time period of the interrogations, preventing her from continuing her work there.

The border officers’ targeting, detention, and questioning of the journalists was unconstitutional. The government violated the First Amendment by compelling each journalist to disclose confidential information about their observations as journalists and about their sources, including the identities of people with whom they may have interacted while working in Mexico.

The government’s disturbing actions also risk deterring other journalists from performing their vital function, which enables us to hold our government accountable. The public needs to know what is happening at the southern border, including about how the government treats asylum seekers. A free and independent press plays a crucial role in documenting these conditions and informing the public. Journalists must be free to continue this critically important work.

That the government’s actions occurred at the border makes them no less unlawful. Border officers at ports of entry may ask questions relating to immigration or customs, but they may not use border screening as a pretext to interrogate journalists about their work. Even in the case of federal law enforcement investigations, journalists enjoy basic protections that play an important part in preserving the freedom of the press. Allowing the government to force journalists to reveal information about their work and sources simply because they travel in and out of the U.S. would imperil that freedom.

When the government tries to circumvent constitutional protections, we must hold it accountable. No journalist should have to fear government interference for having the persistence, courage, and commitment to expose the truth.

What You Need to Know About ACLU Artist Ambassadors, Including...

The Supreme Court Must Protect Students From School-Sponsored...

ACLU of Florida Condemns Bill that Prevents Discussions of Race and...