ICE has erroneously issued a staggering number of detainers against U.S. citizens.

Miami-Dade County’s records show that between February 2017 and February 2019, ICE sent the jail 420 detainer requests for people listed as U.S. citizens, only to later cancel 83 of those requests—evidently because the agency determined, after the fact, that its targets were in fact U.S. citizens. The remaining individuals’ detainers were not canceled, and so they continued to be held for ICE to deport them.

The U.S. government enforces immigration law through an agency called Immigration and Customs Enforcement (ICE). Although ICE is one of the largest law enforcement agencies in the United States, in recent years it has relied heavily on state and local assistance to help carry out deportations. Each month, ICE sends local police thousands of detention requests, known as “detainers,” which ask police to extend a person’s detention in local jail in order to give ICE time to arrive at the jail and take custody.

This report surveys recent evidence that ICE may be regularly lodging detainers against U.S. citizens. U.S. citizens cannot be deported or detained to facilitate deportation. Yet in the last decade, ICE has erroneously issued a staggering number of detainers against U.S. citizens, asking sheriffs and police departments across the country to extend their jail time so that ICE can put them in immigration jail and eventually deport them. This disturbing pattern has been documented many times over.

These errors can have profound consequences, both for the people who are wrongly held and for the state and local agencies that hold them. As recent cases illustrate, U.S. citizens have been kept in jail away from their jobs and families, and they have faced the terror of being told they would soon be deported from their only home. Many have spent time in immigration jail, and some have even been deported. Local police and sheriffs, in turn, have faced immense litigation costs and damages liability to the U.S. citizens they have held for ICE.

Communities across the country have been deeply harmed by ICE’s detainer system. In the last decade, a number of studies have examined how regularly ICE targets U.S. citizens with detainers. Lawsuits have produced further data, as state and local law enforcement agencies have produced records showing how many U.S. citizens ICE has asked them to hold. Together, these data points paint a troubling picture of ICE’s detainer practices. 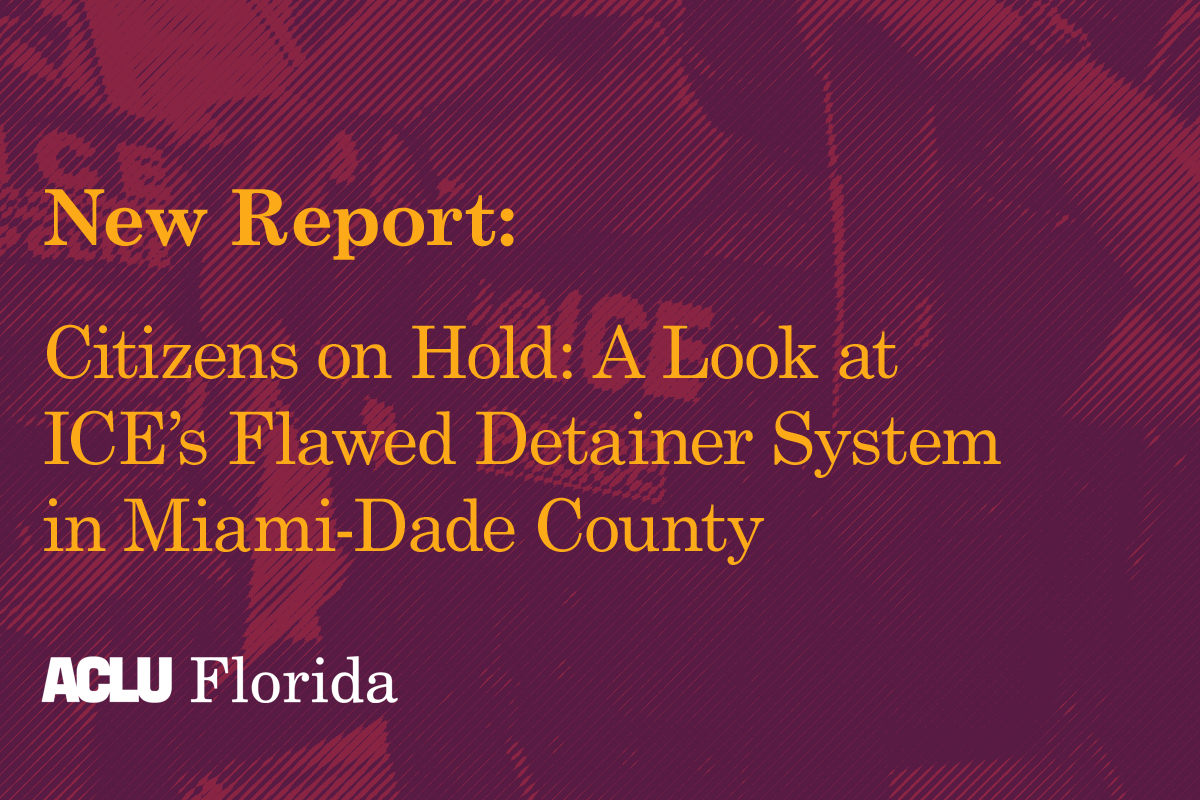 Know Your Rights: If you are approached or arrested by law enforcement (police, immigration agents, or FBI)

Show PDF in viewer on page

In our new report "Vote-By-Mail Ballots Cast in Florida,” we found that vote-by-mail ballots cast in the 2012 and 2016 general election had a higher rejection rate than votes cast at assigned precincts on Election Day and at early voting sites. We also found that younger voters and racial and ethnic minority voters were much more likely to cast mail ballots that were rejected and were less likely to have their ballots cured.

This report contrasts the rates of rejected vote-by-mail (VBM) ballots in the 2012 and 2016 general elections—statewide broken down by age cohorts and racial and ethnic groups, and across counties.

For Florida to have free and fair elections, all eligible voters must have equal opportunity to vote, including those casting (and curing) VBM ballots.

In addition, drawing on available county-level records, it highlights variations in cure rates of VBM ballots received by Supervisors of Elections in the 2016 general election that initially were deemed invalid because they were contained in return envelopes with mismatched signatures. It finds that younger voters, as well as voters from racial and ethnic minorities, are much more likely to cast VBM ballots that are rejected, and are less likely to cure their VBM ballots if SOE staff flag them for having signature problems.

The report also found that Florida’s counties do not use standardized coding when documenting the reasons for VBM ballots to be initially rejected, processed, or cured.

All voters who choose to VBM should take the extra steps to track their mail ballot and, if there is a problem with the voter’s signature, to use the cure process to ensure that their vote is counted and their voice is heard. If your ballot was rejected because your signature was missing on the return envelope or it does not match the signature on file, you are permitted to mail, fax, email, or hand-deliver to your SOE your signed affidavit, along with a copy of a permissible form of identification. Click here for more step-by-step instructions on how to ensure your vote-by-mail ballot counts. 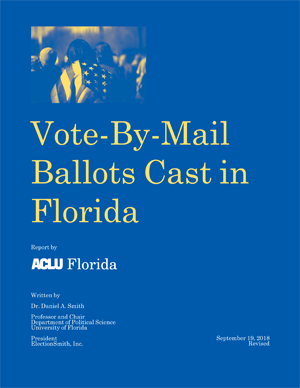 This report contrasts the rates of rejected vote-by-mail (VBM) ballots in the 2012 and 2016 general elections—statewide broken down by age cohorts and racial and ethnic groups, and across counties. In addition, drawing on available county-level records, it highlights variations in cure rates of VBM ballots received by Supervisors of Elections in the 2016 general election that initially were deemed invalid because they were contained in return envelopes with mismatched signatures. It finds that younger voters, as well as voters from racial and ethnic minorities, are much more likely to cast VBM ballots that are rejected, and are less likely to cure their VBM ballots if SOE staff flag them for having signature problems.

To ensure that all eligible voters have an equal access to the voting process and to have their vote processed, tabulated, and accepted as valid:

Daniel A. Smith is Professor and Chair of Political Science at the University of Florida. He is the President of ElectionSmith, Inc., and a former Senior Fulbright Scholar in Ghana, West Africa. He has served as an expert witness in numerous voting rights lawsuits in Florida and across the country, working closely with the ACLU, the NAACP, Demos, the Campaign Legal Center, Mi Familia, SEIU, and numerous other voting rights groups. Dr. Smith holds a M.A. and a Ph.D. from the University of Wisconsin-Madison; he went to Penn State for his undergraduate degrees in Political Science and History. Dr. Smith’s research broadly examines how political institutions affect political behavior across and within the American states. In addition to publishing over 100 peer-reviewed articles, book chapters, and research reports on voting and elections in the American states, his authored and coauthored books include Tax Crusaders and the Politics of Direct Democracy (Routledge, 1998), Educated by Initiative (University of Michigan Press, 2004), and State and Local Politics: Institutions and Reform (4th edition, Cengage, 2015). He is widely quoted in the Florida and national media.

Register or Update your Voter Information Online in Florida 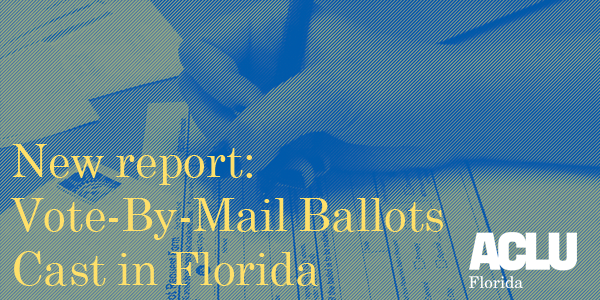 Analyzing data on all adult criminal defendants from 2010 to 2015, we examined individual and neighborhood racial and ethnic disparities across multiple decision points within Miami-Dade County’s criminal justice system: arrest, bond and pretrial detention, charging and disposition, and sentencing.

In our new report, Unequal Treatment: Racial and Ethnic Disparities in Miami-Dade Criminal Justice, our analysis uncovered racial and ethnic disparities at each of these decision points. We also found disparities at every decision point that, regardless of ethnicity, result in disadvantages for Black defendants and neighborhoods while resulting in advantages for White defendants and neighborhoods. This report demonstrates that race and ethnicity shape Miami-Dade County’s criminal justice system. Race and ethnicity shape a person’s involvement in the criminal justice system and in the system’s outcomes.

Unequal Treatment is the most comprehensive study of its kind looking at recent criminal justice data in Miami-Dade County. The report is a joint effort of the ACLU of Florida and its Greater Miami Chapter, and is authored by sociologists from the University of Miami. 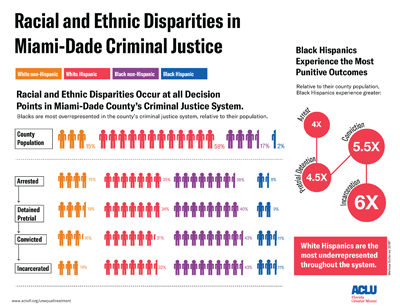 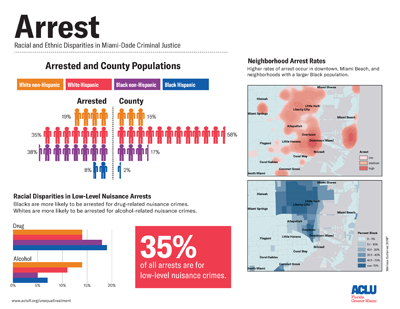 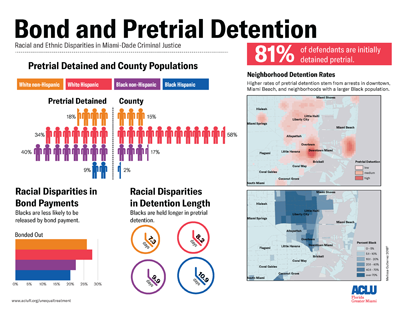 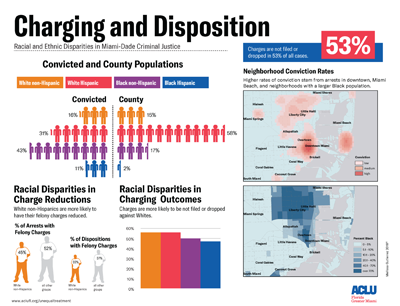 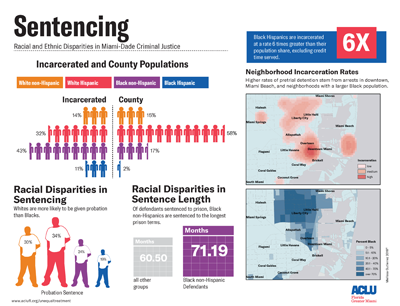 Black defendants (regardless of ethnicity) are overrepresented in Miami-Dade County’s criminal justice system relative to their population share.

Black defendants, whether Hispanic or non-Hispanic, are disproportionately arrested and, once in the system, are more likely than White defendants to suffer:

Black defendants who are Hispanic are most overrepresented and experience the most punitive outcomes at nearly every decision point in the system.

White defendants who are not Hispanic are proportionately represented in the county’s criminal justice system relative to their population share and experience the least punitive outcomes at nearly every decision point in the system.

Black defendants who are not Hispanic are sentenced to longer prison terms than any other racial or ethnic group.

White defendants who are Hispanic are the most underrepresented in the system relative to their population share.

Black defendants who are not Hispanic are disproportionately represented in Miami-Dade County’s criminal justice system. Relative to their share of the county population, these defendants experience:

Black defendants who are Hispanic are even more disproportionately represented in the county’s criminal justice system. Relative to their share of the county population, these defendants experience:

Racial and ethnic disparities also occur at the neighborhood level.

When neighborhood is considered, these disparities persist. There are higher rates of arrest, pretrial detention, prosecution, conviction, and incarceration for defendants arrested in Black (Hispanic and non-Hispanic) neighborhoods, producing punishment “hotspots” in Black neighborhoods.

These neighborhood disparities increase across each successive stage of the criminal justice system, thereby generating a “geographic funnel” for Black neighborhoods. This is especially true for Black Hispanic neighborhoods, although they represent a small fraction of neighborhoods in the county.

About the authors & research team

The report was written by Nick Petersen, Ph.D., and Marisa Omori, Ph.D., both assistant professors of sociology at the University of Miami. Assisting Petersen and Omori was their research team of graduate students, including Roberto Cancio, Oshea Johnson, Rachel Lautenschlager, and Brandon Martinez. 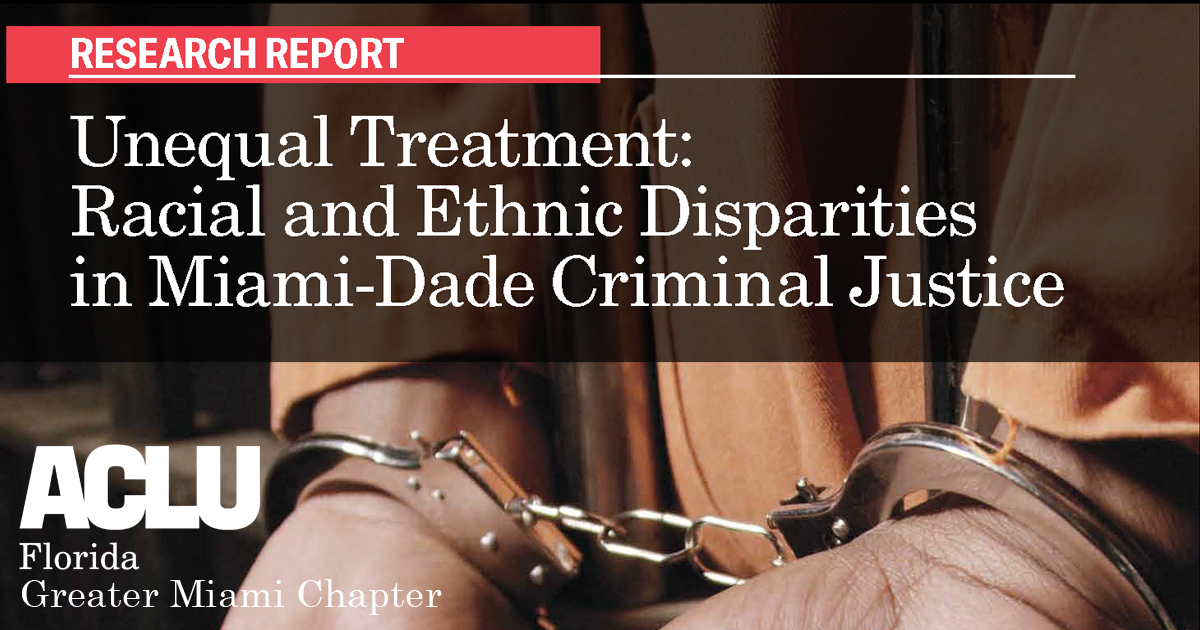