On April 27, the American Civil Liberties Union (ACLU), ACLU of Florida, and our litigation partners will go to trial in U.S. District Court against the state of Florida to win the ability to vote for hundreds of thousands of eligible state voters now being denied that basic right.

In November 2018, more than 64 percent of Florida voters approved Amendment 4, returning the right to vote to Floridians convicted of felonies who completed their sentence and supervision. The only persons excluded are those convicted of homicide or sexual crimes.

Immediately, the Florida Legislature set out to undermine voters’ decision to re-enfranchise their fellow Floridians. They passed Senate Bill 7066, which mandates that returning citizens — who have completed any prison term, probation, or parole — must also pay all restitution, fines, court fees, and costs before they can cast a ballot. Costs alone can be hundreds or thousands of dollars for every person convicted. In other words, they must pay for the right to vote, a blatant violation of the 24th Amendment to the U.S. Constitution, which outlaws poll taxes, as well as the 14th Amendment, which prohibits wealth discrimination in voting.

Along the way, SB 7066 also imposes a system that is impossible for returning citizens to navigate and violates the 14th Amendment right to due process and equal protection. Florida has no centralized database that states how much a person owes in fines and court fees. Records kept by counties and files kept by the state often vary widely on the amounts of legal financial obligations — and even whether money is owed. In fact, even within a county office, those records are sometimes at odds. That makes it nearly impossible for some individuals to determine what they owe, if anything, and whether they are eligible to vote under the new law. U.S. District Court Judge Robert Hinkle, who issued a preliminary injunction blocking SB 7066 in October, called the state’s record keeping “an administrative nightmare.”

The constitutional violations created by SB 7066 don’t stop there. The 14th and 15th Amendments to the U.S. Constitution prohibit voting practices enacted with a racially discriminatory purpose, and SB 7066 is just that: a glaring act of racial discrimination.

Historically, Black Floridians have been disproportionately targeted by the criminal justice system and, through that system, deprived of their right to vote. Also, due to a high incidence of poverty, Black individuals are less able to pay the often-large amounts in fines and fees demanded of them in order to vote.

The members of the Florida Legislature who voted for SB 7066 knew that Black Floridians would be disproportionately affected. In fact, disenfranchising minority voters was the main intent of SB 7066.

This list of constitutional violations aimed at keeping Black Floridians from the ballot box was not at all what Floridians voted for in November 2018. Nonetheless, in June 2019, the bill was signed into law by Gov. Ron DeSantis.

Since then, the ACLU and our partners have been tirelessly fighting for voting rights and against SB 7066 in the courts — and we are winning.

In October, Judge Hinkle granted a preliminary injunction against the law. The state then attempted to stay the decision, which would have blocked our 17 named clients from registering to vote in time for the March 17 primaries. In December, Judge Hinkle denied that effort too, and some folks voted for the first time in their lives. Following an opinion from the 11th Circuit affirming Judge Hinkle’s preliminary ruling, the wind is in our sails for trial.

In this case, Jones v. DeSantis, our litigation partners are the ACLU, ACLU of Florida, the NAACP Legal Defense and Educational Fund, the Brennan Center for Justice at NYU School of Law, the Southern Poverty Law Center, the Campaign Legal Fund of Washington, D.C., the firm of Brazil and Dunn of Miami, and attorney Michael Steinberg.

Our fight is for fundamental fairness and a basic right guaranteed by the U.S. Constitution.

Change your profile photo on Facebook to support voting rights 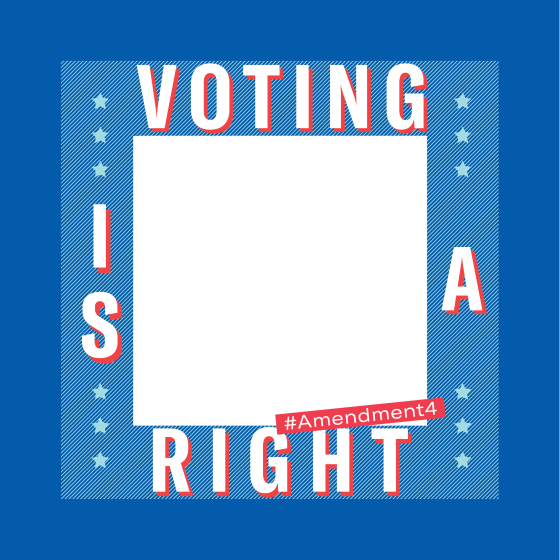