Two Generations of Reproductive Rights Advocates on Life After Roe

On June 24, 2022, the Supreme Court turned back the clock nearly 50 years in the fight for abortion rights. In overturning Roe v. Wade, the court’s ruling dismantles federal constitutional protections and relegates women and all people who can become pregnant to second-class status. It’s a shameful step backward for civil rights and liberties, and a devastating blow to activists who have been fighting for decades to protect this right.

In light of this ruling, Louise Melling, the ACLU’s deputy legal director and director of the Ruth Bader Ginsburg Center for Liberty, talked to Chelsea Tejada, a staff attorney in the Reproductive Freedom Project, about how the abortion fight has evolved over the years and the path forward. Here’s what they had to say about this unprecedented ruling and what comes next. 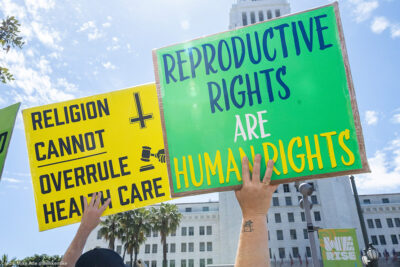 Chelsea: This is a horrible moment, how are you holding up, Louise?

Louise: I’m full of rage and tears. I’m gutted for all those now and in the years to come who will not get the abortions they need for their lives, their families, their health, and their futures. For all those now and in the years to come whose lives and families will be upended by being forced to have a child. I’m in a rage over a court that looks to the status of our rights in 1868 to determine if the Constitution provides protection today, over its disdain for the lives of Black women given this country’s high maternal mortality rate, and over the idea that the state can force people to give birth. I may not live to see the change I want to see, but I will be all in with you and my colleagues at the ACLU in the push to get there.

C: Agreed. It is infuriating to see the court say that our rights today depend on what the ruling white, male class thought more than 150 years ago. It is an absolutely heartbreaking decision that will have a devastating impact on the health, lives, and dignity of millions of people across the country. It must be particularly hard for you to see this happen after you worked for decades in the fight to protect the constitutional right to abortion. Can you share what initially brought you to this work?

The court may have abandoned you, but we see you. You are not alone.

L: I came to the ACLU to work on reproductive rights. At the time, I was motivated by women’s rights. I’m 60. I grew of age in a different time. My mother was born when women couldn’t vote. She spoke of the challenges of unplanned pregnancies. I saw her frustration at what wasn’t possible for her and what wasn’t possible for other women. I saw fighting for abortion access as essential to a broader fight for equality. I didn’t understand in 1989 the importance of this work for transgender men and nonbinary people. I do now.

Now I’m here for gender justice, fighting for the right for women and all people who can become pregnant to access abortion, as well as for people to have children, to raise the children they have, to access gender affirming care, to live our authentic lives, and more. How did you come to this work, Chelsea?

C: I am so grateful for all the work you and others have done to advance gender justice. I pursued a career in reproductive rights litigation because I believe access to abortion is fundamental to an individual’s ability to control one’s body, life, and future. I understood that even when there was a constitutional right to abortion, it still existed for many only on paper: I had seen gerrymandered conservative state legislatures chip away at the right to abortion, making it impossible for many to access this essential health care and forcing them into parenthood all the while not providing any social safety network to help them raise those children. I wanted to stop those attacks and work to expand access, so that the right was a reality for every person. And that’s still what I want — even more so now that the Supreme Court has made abortion even more inaccessible and stigmatized. It is scary to hear the Supreme Court say that if you get pregnant, the government can control your body and force you to give birth. What keeps you fighting after a setback like this?

L: I have a new mantra that keeps me going, even at times like this: The only thing harder than continuing is stopping.

We do right by fighting for our own liberation. We are speaking our own truths — about pain, our pride and joy in who we are, our vision of something more beautiful and just. We do right by giving voice to our pain and our vision, to guide the journey that lays ahead. We do right when we enable dissenters to speak the truth about injustice, to provide some solace, to demand change. We do right when we don’t let silence sit. We do right by saying to people who need an abortion: The court may have abandoned you, but we see you. You are not alone.

There’s no shame in struggling. I think we all are. But it’s the vision of what happens if we stop that gets me going every time.

C: Do you have any advice for someone who is just getting started advocating for reproductive rights?

L: In general, I’m less interested in offering advice and more interested in listening and learning from those at the start of their journey, who are bringing a fresh perspective to these unprecedented times. There’s already so much wisdom in the generations that follow mine — about gender and intersectionality and organizing, for example. At a recent ACLU gathering, after hearing a younger colleague from Kentucky speak, and today, talking to you, Chelsea, I think, “You are the future, and I can’t wait to see what you do.”

The struggle for our freedom is long term.

All that said, I do have a couple of things to add. I know a lot of folks — like me — are angry. And given the current climate — particularly with the threats to voting rights — I’ve seen folks get angry about calls to vote and some of the usual tactics for change, thinking them too ineffectual. I get it, I really do. But I think about the 2024 election, and what could happen if more elected officials hellbent on further eroding our civil rights and liberties wind up in office. But no one should stop at the ballot box. The struggle for our freedom is long term. The moment is extraordinary, with more to come. We need a vision and an array of tactics, creative and traditional. And we need staying power. What advice would you give to people who want to help?

C: There are so many ways and places to get involved in the fight: Tell your abortion story; speak to your loved ones about why abortion is important; write a letter to the editor in your local or school paper in support of reproductive autonomy; get involved in local, state, and federal elections; and push for better abortion policies — including in blue states — to improve access. Remember there is essential movement work outside litigation, such as through organizing and practical support networks. You could even become a health care worker who supports people during pregnancy, like a doula or midwife or nurse or doctor or pharmacist. Those who can should donate to abortion funds, show up for protests, call your representatives, sign petitions, and spread the word. There is something for everyone to do no matter where you are.

L: Chelsea, what do you want people to know about this decision?

C: First and foremost, I want everyone to know the real world impacts that this decision is having, and will continue to have, on individuals and families across the country. When the opinion came out, there were people in waiting rooms ready to get taken back for their appointments who then had to be turned away. We’ve heard that many of these patients were in tears, despondent that they would not be able to end their pregnancies that day as expected. And since then, many others have been, and will continue to be, denied access to this essential health care. The Supreme Court said it is fine for states to force these individuals to remain pregnant against their will and suffer the health risks and life-altering consequences of continued pregnancy, childbirth, and parenting.

A court that is willing to take away a constitutional right that has been in place for nearly 50 years, and around which people have ordered their lives, is a court that will not hesitate to erode other rights.

I also think its important for folks to know that despite the court framing this as a decision that leaves it up to each state to decide whether abortion is allowed, the opinion also busts the door open for Congress to ban abortion nationwide the moment anti-abortion politicians wrangle a majority. We may have a patchwork landscape now, but without a federal constitutional right to abortion, its possible that this essential health care could get banned everywhere. It’s also good for people to know what might be next: A court that is willing to take away a constitutional right that has been in place for nearly 50 years, and around which people have ordered their lives, is a court that will not hesitate to erode other rights. The decision is horrible in and of itself for its outright attack on abortion, but I’m also afraid of what it means for our right and ability to access birth control and gender-affirming care, and to marry who we love.

L: A lot of advocates have talked about how Roe was “the floor, not the ceiling,” reflecting the fact that Roe has never been enough to ensure abortion access reaches everyone who needs it. What is the ceiling to you?

C: There is no ceiling when it comes to bodily autonomy and self-determination! The Supreme Court might think that it should be up to states to decide whether and when abortion is permitted, but I think it should be left to the individual who is pregnant to decide. Pregnant people are experts in their own lives. They always deserve to be trusted to make the decisions that are right for them, their health, their families, and their futures. While this is far from our recent or current reality, even in this difficult moment I am trying to focus on the potential future we could create together, where everyone has the ability to control their body and make important life decisions for themselves — whether it be terminating a pregnancy, accessing contraceptives, or accessing gender-affirming care. Louise, what message do you have for people on this long road ahead?

L: I will quote from remarks made recently by Deborah Archer, the president of the ACLU: “Every day, we have to wake up and fight and move forward, because if we’re not pushing forward, not fighting to move forward, we’re going to be pushed back — and that really just isn’t an option.”