This Place Isn’t Meant to Help You Get Better

I was shot multiple times by police and then unlawfully thrown in jail to cover up the excessive force violation. I am a 34-year-old Black man. I was charged with aggravated assault, but I never hurt anyone. I was hurt plenty, though. Police do fucked up shit and get away with it, and people need to hold them accountable to make society better as a whole. There’s no accountability when it comes to police or jail staff. In order for any society to function, there has to be accountability on both sides. What if somebody didn’t do nothing wrong and you’re covering it up? That means corruption just kills the system, everything that was meant to be good. I understand that officers risk their lives, they wake up every day and take on a challenge to make sure everyone is safe. That is an honorable act. But when you have people who lie or misuse their power, and another person helps them support that wrong action, that brings shame upon every good police officer. It brings shame on every department. In order for something to be built, something has to be destroyed, and this jail’s administration has to be destroyed. We’re too far along as a society to continue to be submerged in the wrongs and the corruptions, instead of to stand for what’s right. 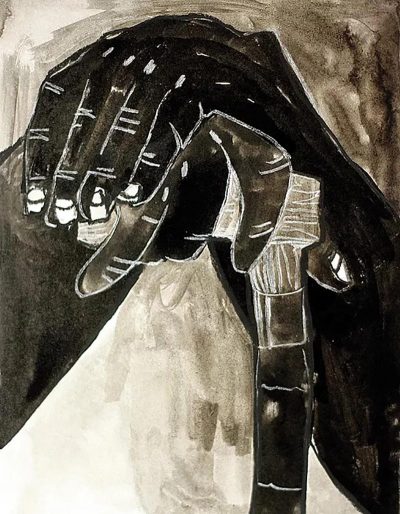 Oaklee Thiele is an artist and disability rights advocate

After I got shot, those bullets shattered my foot and messed up my bowels. I’m still dealing with obstructions and I walk with a limp that only gets worse every day. I keep putting in sick calls; they don’t care. Since I’ve been inside, I’ve used a wheelchair, a walker, and then a cane. I still need the cane, but it disappeared when I went to solitary and I haven’t had it since. With the pain in my foot, getting around is really hard. I’ve stopped using my recreation hour, the only one I get out of my cell every day, because I’m afraid to get hurt even worse. Having a cell with grab bars in the bathroom would make me feel safer, but there’s only two of those on the pod and guys have to buy their way in. We don’t have any handicap showers, either. Once you go to jail, you get denied medical treatment. These are the people who are supposed to care for you. They take on a leadership role to care for you, but they don’t do it. It’s deception. That’s not a society that I want to live in or one that I think anyone else wants to live in.

There’s no difference between what the police did to me and what’s happening in jail: the non-caring, the covering up, the assaults, being put in the hole. It’s not a different society. I just came off a five-month stint in solitary. Let me tell you － it’s petrifying. The constant dimness, the blood and vomit covering the cells, the neglect and abuse from guards. It’s terrible to be going through all of that. Especially for someone with mental illness like me, the hole is no joke. I have PTSD, severe depression, antisocial disorder, anxiety, and paranoid schizophrenia. Everything about being in here just makes it worse. I went on a hunger strike a few months back to protest how bad things are, and they threw me in a suicide cell under a freezing cold vent to stop me from protesting. At one point, I was too sick to stand when the guards told me to and they tased me and shot me with pepperball bullets instead of calling medical. If you have a mental health crisis, they respond with force and shoot you with pepperballs. I haven’t had the chance to talk to a therapist since I’ve been in here, but I guess I’ll keep asking. I don’t know how I’m supposed to be “rehabilitated” like this. 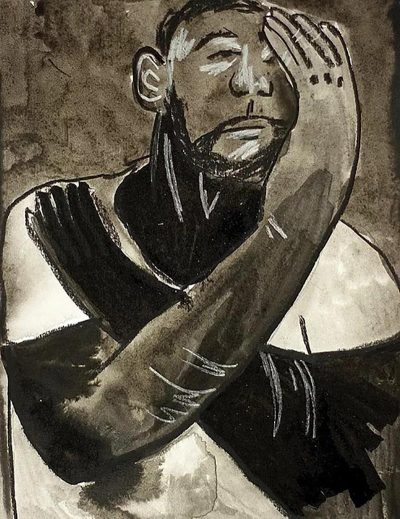 Oaklee Thiele is an artist and disability rights advocate

It’s just one big system to eradicate everyone’s rights. If someone violated those rights and there’s evidence to support that, that person has to be held accountable. The only way we can address this problem is by coming together. It’s linked to the outside with police misconduct and what happened to Breonna Taylor. How long can we expect people to peacefully protest when their rights are violated? I wish people understood that jail isn’t really what they think it is; it’s a façade. This place isn’t meant to help you get better. When I was in solitary, I did ask for help but it never came. I was left in a cell, spitting up blood, laying in my own vomit, to die. If it wasn’t for certain medical staff who went against the norm and upheld their oath to provide adequate medical treatment despite officers telling them, “That’s not the way we do things here,” I wouldn’t be alive.

I’m not the only one who feels this way. I try to help others write their grievances and get some justice, but it just puts an even bigger target on my back. I won’t stop doing it, though. It’s sad that the people in charge of taking care of us abuse that power rather than help us like they should. It’s not nothing to play with. People in here are being beaten, abused, and left to die. We need people; we need you. Too many people see history as just that － in the past. They don’t realize that history is now.

Note: This piece was originally published in The Breaking Point Project.

How to Save Lives in Jail During the Opioid Crisis