As a clinic escort, I want people seeking abortion care to know we aren’t going anywhere.

Last week, the Supreme Court overturned Roe v. Wade, upending 50 years of legal precedent and sparking protests across the country. It’s easy to think Roe fell with the stroke of Justice Samuel Alito’s pen, a legal battle lost in a courtroom. But as a clinic escort for the last decade, I’ve watched the fight for abortion access play out in real time on the sidewalks in front of abortion clinics in Missouri and Illinois.

As a volunteer clinic escort, it’s my job to help patients get from their car door to the clinic door safely; to provide a shoulder to lean on and a gentle, welcome distraction. It might seem strange that a person would need accompaniment when walking such a short distance across a parking lot, but patients seeking health care from these clinics endure a lot of hostility in just a few yards. Anti-abortion protesters do everything they can to discourage patients from getting the care they need: yelling, pleading, praying, and even posing as clinic employees at the front gate of the clinic, next to a sandwich board that says “Check in here.”

The first time I encountered the roar of anti-abortion protesters outside a clinic, I wasn’t an escort. I was going to a Planned Parenthood in the Rio Grande Valley of Texas, where I’m from, for STI testing and birth control. The clinic I went to didn’t even provide abortions; those were few and far between, even 11 years ago. Still, there they were on the sidewalk — little old ladies, holding signs and angrily yelling. I didn’t understand why they were screaming at me just for being there, just for getting birth control. It’s worth noting that those women were white, while the Rio Grande Valley is almost 94 percent Hispanic/Latino.

A few years later, when I saw an ad seeking clinic escorts after moving to Missouri, I remembered how it felt to get yelled at just for seeking basic health care. Now, as a proud member of the pro-abortion community in Missouri and Southern Illinios, I count my fellow clinic escorts among my best friends. As troubling as last week’s ruling is, I’m thankful to have this family to lean on. We support each other in every way possible, and we need that support more than ever now.

While escorting is so important, it’s just one of many ways people can get involved.

Last Friday, Missouri became the first state with a “trigger ban” to outlaw nearly all abortions in the state. This is devastating, but we have been preparing to meet this moment. Clinic escorts previously assigned to a clinic in Missouri will have to direct their energy to the two clinics across the river in Illinois — Hope Clinic in Granite City and Planned Parenthood in Fairview Heights — which have also been preparing for an influx of thousands of patients. As we bolster our volunteer numbers in Illinois, we’re also going to get our escorts plugged into other volunteer opportunities. While escorting is so important, it’s just one of many ways people can get involved. 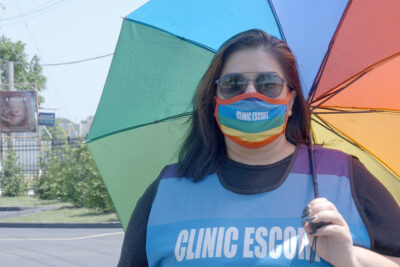 I understand that many people may feel hopeless, but I’m asking you not to ignore this moment. We need all hands on deck. All of our love, hope, and even anger will be channeled into helping patients however we can, and you can help, too. You can donate to a local abortion fund, or become a clinic escort if you can. Find your local community of abortion supporters and ask them what they need. There are so many of us, even in red states and rural communities.

I understand that many people may feel hopeless, but I’m asking you not to ignore this moment.

There’s also something very simple that we should all be doing in this moment: When talking about abortion, say the word “abortion.” Shying away from the word only perpetuates stigma. No one should feel shame for seeking abortion care, but that’s exactly what those protesters outside the clinics are trying to do. They’re not just trying to prevent patients from getting to their appointments — they’re trying to perpetuate abortion stigma that enables bad policies, harmful rhetoric, and misinformation. Exacerbating abortion stigma was a key tactic anti-abortion actors used that has led to this terrifying ruling from the Supreme Court. But we don’t have to stand for it. Abortion is health care, and we should talk about it like we would any other kind of health care we seek.

In the almost decade that I’ve been escorting patients, I’ve occasionally encountered folks coming from other states. But in more recent years, and especially in the last six months after Texas passed SB 8, it’s become much more common. Now, those numbers are going to climb even higher, as people get pushed out of states that ban abortion and are forced to travel long distances for care. Regardless of how far people have to travel, Pro-Choice Missouri clinic escorts will continue to support patients in Illinois, now and always. I don’t get the chance to say this to patients while I’m escorting them into the clinic but I want them, and all abortion supporters, to know this: We love you, and we aren’t going anywhere.

We Need the PUMP Act to Protect Nursing Workers Like Me

Victims of Discrimination Have No Path to Justice Following Supreme...

Two Generations of Reproductive Rights Advocates on Life After Roe

Your Abortions. Your Voices. Your Stories. | American Civil...