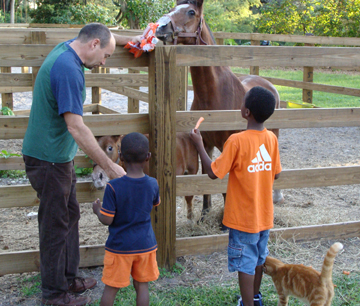 Thanksgiving and the year-end holiday season are right around the corner. During this time of year, families gather to eat together, laugh together and generally celebrate being together. In the past two years in Florida, those families have included gay men and lesbians who have adopted children and given them loving homes. But it hasn’t always been that way.

For 33 years, Florida law categorically banned gays and lesbians from becoming adoptive parents. As a result, many children who could have been placed in a loving, permanent home were denied that opportunity, spending years in the foster care system and in many cases, aging out without ever being adopted.

In 2009, the ACLU of Florida, along with the ACLU LGBT Project, represented Martin Gill, a Miami father who was trying to adopt two children who he was already a foster father for. After years of litigation, the ACLU successfully overturned the adoption ban in the fall of 2010.

This Saturday, November 17, is National Adoption Day and thanks to this victory, all adoptive and potential adoptive families in Florida, including those with gay and lesbian parents can celebrate this occasion designed to raise awareness of children in need of a loving adoptive home and the parents who give those children the care and permanency of a family

In honor of National Adoption Day and in celebration of these incredible last two years we have created a video telling the story of Martin’s family and how the adoption process has evolved in Florida over the last two years. The video also features Vanessa and Melanie Aleni, who adopted their son Ethan right after the Gill decision. They are two loving, doting, mothers that have provided their son with the most remarkable gift: a forever home.

Through interviews with people on the front lines in the fight to end the adoption ban, the video recounts the story of how and why Martin and the ACLU challenged the law, describes what the monumental change has meant for other gay men and lesbians who want to provide kids with loving homes, and celebrates the new opportunities for children to find forever families in the wake of the decision.

In the time since we began our campaign, the number of families directly impacted by the court’s decision has continued to grow. As of now, over 200 children have been adopted by lesbian or gay parents.

National Adoption Day is a time to reflect on the importance of family and to celebrate those who helped give a child one. Today I’m reflecting on a time when we were interviewing Martin for the video, and he asked his oldest son, “What does adoption mean to you?” He looked at his dad and said, “forever family.” I’m proud to say that this year, because of the work we’ve done, there are hundreds of kids who will share this and every other holiday with their “forever family.”