Thirty seconds. That’s how long it took for a Cook County judge to eyeball the silenced woman standing before him and set the price of her freedom. Thirty seconds.

It was early March and 45-year-old Lavette Mayes had just spent three days in a Chicago lock-up. She was ill-prepared for cell block weather, and she froze those first couple of days in a loose hospital gown pulled tight over her own thin nightgown, a pair of pants, and old house shoes. After begging the guards, they allowed her sister to bring a coat, buttons cut-off, and white K-Swiss gym shoes. Even so, Mayes, who grew up on the South Side, says, “I was in no kind of condition to stand in front of a judge, not even with my face washed.”

The biggest life change that Mayes anticipated in 2015 was an end to her 23-year-marriage. She was going through a bitter divorce. But nothing could have prepared the mother of two to spend the next 14 months without seeing or touching her 5-year-old son, and 14-year-old daughter again — all because she could not afford pretrial bond. All of them bore the heavy weight of a judge’s decision to set bail at $250,000, which meant pay 10 percent down to go home with electronic monitoring.

“My children were just as incarcerated as I was with me being gone,” she says. 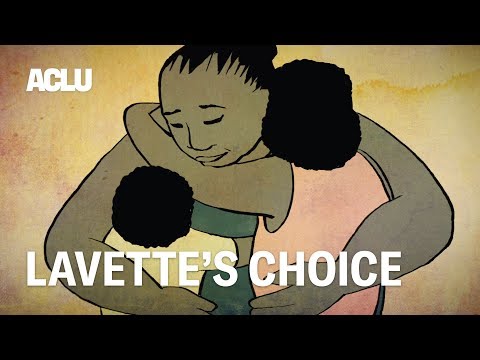 That day, Mayes saw dozens of women filing through bond court. “The [court-appointed] attorney that was next to me, he was talking so extremely fast, it sounded like you at auction,” she says. “The judge hit the gavel, and I’m like, ‘What did they say?’ It went so fast.” Thirty seconds. Mayes’ freedom was gone. “I just went numb, like, ‘Where would I even get that kind of money from?’”

Up until that moment Mayes had no criminal history, no experience with the criminal system. She was running a small, school-van transport business out of their home. It was her pride. One evening a physical fight with her 67-year-old mother-in-law sent both women to the hospital.  Mayes was charged with aggravated battery against a senior. Three days in a freezing cell would turn into 431 days of imprisonment because neither she nor her family could afford $25,000 in cash or credit.

Losses stacked. Mayes spent 11 of 14 months in the jail’s hospital unit, much of it sleeping with the aid of a CPAP machine to help her breathe. She lost her livelihood. The two vans were repossessed. Nearly $10,000 in savings evaporated. Her husband sought permanent custody of the children and fear of losing them both nearly crippled her. She was learning that nothing was more damaging than the loss of normalcy for her kids. It was as if a wrecking ball had smashed their lives.

After nearly a year of bureaucratic wrangling with the courts, a judge reduced Mayes’s bail and set the down payment amount at $9,500.00. Then after applying to the Chicago Community Bond Fund, she made bail — family put up $2,000, CCBF the rest — and Mayes went  home with an ankle monitor to her sister’s place on the South Side. She had hoped to care for her children as she had before.

Electronic monitoring turned out to be a different kind of jail, though. She missed her son’s first day of school. He has special needs and because of bureaucratic mix-ups or delays, she rarely got prompt approval to attend his weekend physical and recreational therapy. Now six, he was learning how to ride a bike, but she couldn’t leave the steps of the property. If he wandered off, she couldn’t follow him.

When her daughter was in her high school play, Mayes couldn’t attend performances. So, when lawyers advised her that fighting the aggravated battery charge could mean another year of electronic monitoring, she discussed it with her family and decided to plead guilty. “If EM had given me more movement, I probably would have fought the case,” Mayes says. But “my kids were not getting the healing that they needed.”

Mayes took a plea deal on October 5, 2016. Even though she had been living at her sister’s, the rules of release required her to be processed out of a downstate prison four hours away from Chicago by train.  When she got home, her son and daughter wanted to know if it was over, if they could all really go outside, if they could all go to the park together. That night, they all slept in the same bed, holding each other. For another year after she was processed, Lavette still had limitations on her freedom and parole officers showed up at her house unannounced several times to check on her.

Asked today if she feels like a free woman, Mayes says, no.  She is thrilled to be with her children, but she wants to create a life for them, too. With a felony record, she hasn’t been able to find housing or work.  She thinks about her small, transport company, the school contracts she’ll never again have, the commercial driver license that she lost.

“I don’t believe there’s such a thing as a second chance,” she says. “I’m still fighting today to get back what I had before I went to jail.”

This article is a part of a series on mass incarceration. Click here to learn more.

Missouri is Trying to Bar Me From My Father’s Execution. Governor...

Two Cups of Broth and Rotting Sandwiches: The Reality of Mealtime...

Our Veterans Need Support, Not Incarceration