In 2020, Vote to Protect Our Civil Liberties

Our country and our state are at a crossroads. On August 18 and November 3, Floridians have a chance to make decisions for elected leaders that will ultimately have a lasting impact on our civil liberties for generations to come.

The race for the White House is, of course, crucial in 2020. Recent actions by the current administration have only amplified the urgency. Condemnation of the Black Lives Matter movement, unlawfully unleashing federal law enforcement agents against peaceful protesters, the continual persecution of immigrants, attacks on abortion care, attacks on LGBTQ+ equality, and the utter failure to ensure all steps are taken to protect people’s health during the COVID-19 pandemic have all created clear, pressing civil rights issues at the executive level.

In both the Aug. 18 Primaries and the Nov. 3 General Election, voters can choose representatives at the congressional, state and local level that will have a say on our collective and individual civil rights. It is imperative that voters know the candidates’ positions on crucial issues before filling out a ballot.

Candidates running for office in 2020 must be committed to protecting and advancing the civil rights guaranteed to all of us in the Constitution.

ACLU Justice Voters demand candidates for public office commit to protect our democracy, end discrimination, expand rights, and ensure that we live in a nation with liberty and justice for all.

ACLU Justice Voters demand candidates for public office commit to protect our democracy, end discrimination, expand rights, and ensure that we live in a nation with liberty and justice for all.

There are three powerful people voters should pay close attention to in each of Florida’s 67 counties — they are the state attorney, sheriff and supervisor of elections.

In the wake of the killings of Breonna Taylor in Louisville, George Floyd in Minneapolis, Rayshard Brooks in Atlanta, and Tony McDade in Tallahassee, Floridians have called for justice and for an end to police violence and racial discrimination in the criminal legal system. Floridians have an opportunity to vote for sheriff and state attorney candidates that can eliminate racial injustice and hold law enforcement accountable in Florida.

Your Sheriff decides who gets arrested in their jurisdiction and for what. Many people are arrested for minor, non-violent offenses. In most of these cases, law enforcement officers can issue a civil “notice to appear” in lieu of arrest. Candidates for sheriff should set specific, measurable goals for increasing the use of those notices and reducing incarceration.

People under the age of 18 are often accused of minor offenses — such as possession of small amounts of marijuana. All too often they are arrested even though sheriffs can employ alternatives to arrest and keep kids out of the criminal justice system. Some counties have higher youth arrest rates than others. Candidates for sheriff should prioritize keeping youth out of the criminal justice system and setting measurable goals for decreasing the arrests of youths.

We’ve seen the videos ourselves — cops too often resort to excessive force while interacting with Black and brown people. These interactions and racialized policing have too often led to abuse, harassment, and the murder of Black and brown people. The epidemic of police violence in this country is not an issue of “bad apples.” Modern policing is rotten at its core. Candidates for sheriff should present detailed plans that will restrict the use of deadly force. It should be authorized only when strictly necessary to protect life and after all other reasonable alternatives are exhausted, including the use of de-escalation and nonlethal force techniques. Sheriffs should also commit to a specific increase in diversity among their officers, especially those in supervisory roles.

Immigrants must feel safe in our communities. Collaborating with Immigration and Customs Enforcement (ICE) directly impacts whether immigrants feel safe to report crimes perpetrated against them or someone else, and in turn makes our communities less safe. To ensure safe communities, candidates for sheriff should commit to not participate in the Warrant Service Officer program, any 287g agreement, or similar programs that co-opt deputies as ICE officers. They should also decline to rent detention space to ICE for immigrants transferred from federal custody.

If someone is accused of committing a crime, it is not the police but the state attorney who has the sole power to decide if criminal charges are filed and the severity of those charges. They alone decide who is deserving of a jail or prison sentence, who will be routed into a diversion program to help rebuild their life, or have their charges dismissed altogether. State Attorney candidates must not only acknowledge that racial disparities in the criminal justice system are systemic and exist, they should commit to a specific, measurable goal to reduce the number of people incarcerated.

Black people are still more likely to be incarcerated for marijuana possession than white people in every state, including those that have legalized marijuana. State Attorney candidates should adopt a minimum threshold of 20 grams to prosecute marijuana offenses. Massive racial disparities exist among Floridians that receive suspended driver’s licenses for outstanding financial obligations. Black Floridians make up only 16.9 percent of the State’s population, but in 2013 Black Floridians made up 37.3 percent of all driver license suspensions for outstanding fees and drug offenses. State Attorney candidates should commit to not seek the suspension or revocation of drivers’ licenses for actions unrelated to driving, including drug offenses.

Finally, no one is above the law, and especially not law enforcement officers. Before 2015, no officer in Florida had been charged for an on-duty killing in 27 years. For too long, police officers have been able to use excessive and/or deadly force without repercussions. State Attorney candidates should commit to take complaints of police brutality seriously by investigating them and holding the guilty accountable.

Kids do not belong in adult jail. Every day, approximately 300 youth are held in adult jails. This decision shifts these children from the juvenile delinquency system, with its goal of "effective prevention, intervention and treatment services that strengthen and reform the lives of children," to the adult criminal justice system, which is focused instead primarily on punishing the offender, with goals of rehabilitation secondary. Your state attorney can push young people into the criminal justice system or give them a second chance to learn from their mistakes by committing not to send kids to adult jail.

Finally, the majority of people in our jails have not been convicted of anything and are there only because they can’t make bail. No one should be warehoused in jail simply because they do not have the money to afford their freedom. State Attorney candidates should commit to not seek monetary bail unless a person poses a clear danger to the public. And, prisons and jails are not drug or substance abuse rehab centers, so why do we keep using them for that? Our prisons and jails are packed with people who suffer mental illness and substance use disorders. State Attorney candidates should commit to reduce arrests in such cases and provide more effective local services, like rehabilitation and community mental health.

Each of Florida’s 67 counties has a Supervisor of Elections (SOE) who is responsible for conducting fair, honest and accurate elections.

Given the COVID-19 pandemic, many Floridians will choose to vote by mail (VBM) this year, but Florida has a history of rejecting far too many VBM ballots and people of color and young voters are disproportionately impacted by such rejections. Whether a vote counts varies significantly by age, race, and county. Black voters have their mailed ballots rejected twice as often as their white neighbors. Young voters, between 18 and 21 years old, had their mailed ballots rejected 2.5 times as often as other voters. SOE candidates must commit to ensure that all citizens have access to VBM ballots. They must also ensure those ballots are fairly counted and that if a ballot is rejected for any reason that the voter is promptly notified and given the opportunity to “cure” their ballot so it can be counted.

The SOE has wide discretion on the number and locations of county polling sites and the number of early voting days. They should commit to ensuring polling locations equally serve all citizens, regardless of race or economic status, and polling places should be accessible and easy to find. They should also commit to provide as many early voting days as state law allows.

Some populations face greater barriers to voting. Supervisors of Elections can help ease these barriers so every eligible voter has an equal opportunity to vote.

As the battle for voting rights continues in Florida, SOE’s should commit to provide clear guidance on registration and voting policies. SOE’s should work with county sheriffs to provide ballots and other electoral materials for voters awaiting trial in county jails, and work with shelters and service providers to provide voting materials to those experiencing homelessness. SOE’s are also responsible for providing ballots in Spanish and other languages, as well as election materials voters need.

Floridians will also have the opportunity to vote for mayors, city and county commission members, school board members, state legislators, members of Congress, and more in the Florida Primary Election, and, of course, for president on November 3.  While the challenges may seem never ending, by working together to defend freedom in Florida, we can move our nation to realize our true vision for equity and justice.

You have the power to vote for a candidate who speaks to you and your community’s values. Research the candidates to understand their positions on these critical civil liberties issues, and then vote like your rights depend on it -- because they do. 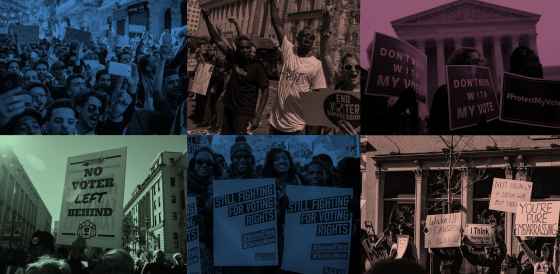 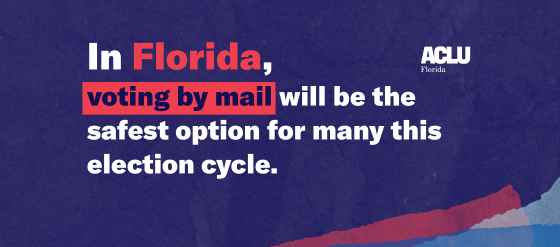 Vote By Mail in Florida